Be prepared to meet three unforgettable women. Twenty-two-year-old Skeeter has just returned home after graduating from Ole Miss. She may have a degree, but it is 1962, Mississippi, and her mother will not be happy till Skeeter has a ring on her finger. Skeeter would normally find solace with her beloved maid Constantine, the woman who raised her, but Constantine has disappeared and no one will tell Skeeter where she has gone. Aibileen is a black maid, a wise, regal woman raising her seventeenth white child. Something has shifted inside her after the loss of her own son, who died while his bosses looked the other way. She is devoted to the little girl she looks after, though she knows both their hearts may be broken. Minny, Aibileen’s best friend, is short, fat, and perhaps the sassiest woman in Mississippi. She can cook like nobody’s business, but she can’t mind her tongue, so she’s lost yet another job. Minny finally finds a position working for someone too new to town to know her reputation. But her new boss has secrets of her own. Seemingly as different from one another as can be, these women will nonetheless come together for a clandestine project that will put them all at risk. And why? Because they are suffocating within the lines that define their town and their times. And sometimes lines are made to be crossed. In pitch-perfect voices, Kathryn Stockett creates three extraordinary women whose determination to start a movement of their own forever changes a town, and the way women— mothers, daughters, caregivers, friends—view one another. A deeply moving novel filled with poignancy, humor, and hope, The Help is a timeless and universal story about the lines we abide by, and the ones we don’t.

Description:
Penguin Audio, February 2009. Audio CD. Good - Cash. CDs have minor scratches but still audible. Heavy wear to outside of case with creasing and tears. Stock photos may not look exactly like the book.
Item Price
$5.00
$3.99 shipping to USA

Description:
Penguin Group USA, 2009. Audio Book. Good. AudioCD. 15 Reliable and presentable AUDIO CDS withdrawn from the library collection, polished for your satisfaction for a nice set. Some library sticker and marking to the case and the CDs. The Audio CDs are in individual slots, protected, and clear sounding. Enjoy this audio performance..
Item Price
$7.95
$4.49 shipping to USA

Description:
Penguin Group USA, 2009. Audio Book. Good. AudioCD. 15 AUDIO CDs in the original printed box. Some shelf wear to the box. We will polish each CD for a smooth listening experience. Enjoy this Audio CD performance, always a good value in the original box. .
Item Price
$10.95
$4.49 shipping to USA 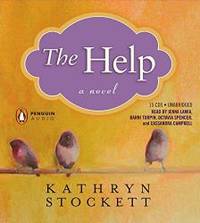