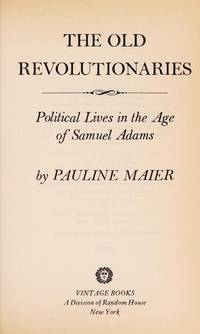 Description:
Vintage. Paperback. GOOD. Spine creases, wear to binding and pages from reading. May contain limited notes, underlining or highlighting that does affect the text. Possible ex library copy, will have the markings and stickers associated from the library. Accessories such as CD, codes, toys, may not be included.
Item Price
$1.34
$3.00 shipping to USA

Description:
Vintage. Used - Good. Good condition. A copy that has been read but remains intact. May contain markings such as bookplates, stamps, limited notes and highlighting, or a few light stains.
Item Price
$8.99
$3.99 shipping to USA 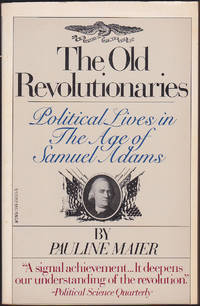 Description:
New York: Vintage, March 1982. Trade Paperback. First Vintage Books Edition. Tanned with dust stains to top edge, otherwise As New. Not from a library. No remainder mark. xxii+309 pages. The "old revolutionaries" were Samuel Adams, Isaac Sears, Thomas Young, Richard Henry Lee, and Charles Carroll. Of widely varying backgrounds and interests, all of them had their greatest influence in the years between 1769 and 1776, and all of them saw their power transferred after the war to the men we know as "the Founding Fathers." In telling the stories of these men, Maier shows how the American Revolution was less a collective movement than a commitment to an ideal of a republic, which different people interpreted differently. She describes not just why Americans made the Revolution, but what the Revolution did to them.
Item Price
$15.95
FREE shipping to USA

Description:
Vintage Books USA, 1982. This is an ex-library book and may have the usual library/used-book markings inside.This book has hardback covers. In good all round condition. Please note the Image in this listing is a stock photo and may not match the covers of the actual item,500grams, ISBN:039475073X
Item Price
$5.51
$15.65 shipping to USA