She's every lover's feisty girlfriend. She's every father's courageous daughter. She's every woman's tough, vulnerable, and spirited alter ego. She's Kinsey Millhone, familiar to millions of readers around the globe, and she's back in full stride in P is for Peril , her latest venture into the darker side of the human soul. Mordant, mocking, and deceptively low-key, hers is a voice we know we can trust, from a character we've come to love. Through fifteen novels, Sue Grafton has gone from strength to strength, never writing the same book twice. So it's no surprise that she has taken on new territory in her sixteenth, this time entering the world of noir. It's a world cast in shades of black amid shafts of steel and silver, a shadow land in which the mysterious disappearance of a prominent physician leads Kinsey into a danger-filled maze of duplicity and double-dealing as she taps into the intricacies of a cunning Medicare fraud. P is for Peril : the novel in which Millhone stakes her life on a thin thread of intuition because the facts glint elusively out of reach and only guesses offer any shot at the truth. "Unlike many detective series, Grafton's seems only to get better each time out," wrote Entertainment Weekly , and P is for Peril is a case in point. Pushing herself, reaching further with each new book, Sue Grafton delivers every time.

Description:
Marian Wood Books/Putnam. Hardcover. GOOD. Spine creases, wear to binding and pages from reading. May contain limited notes, underlining or highlighting that does affect the text. Possible ex library copy, will have the markings and stickers associated from the library. Accessories such as CD, codes, toys, may not be included.
Item Price
$1.00
$3.00 shipping to USA

Description:
Marian Wood Books/Putnam. Used - Good. . . All orders guaranteed and ship within 24 hours. Your purchase supports More Than Words, a nonprofit job training program for youth, empowering youth to take charge of their lives by taking charge of a business.
Item Price
$1.00
$3.00 shipping to USA 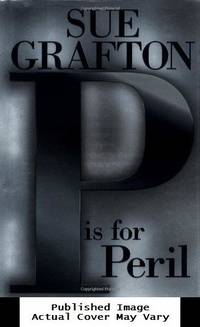 Description:
UsedGood. The item shows wear from consistent use, but it remains in good condition and works perfectly. All pages and cover are intact (including the dust cover, if applicable). Spine may show signs of wear. Pages may include limited notes and highlighting. May NOT include discs, access code or other supplemental materials.
Item Price
$1.36
$3.99 shipping to USA

Description:
Great conditionOnly been read one. Some very, very tiny mars on one single edge.
Item Price
$2.50
$3.00 shipping to USA