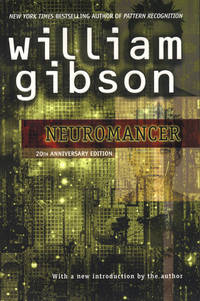 SPECIAL 20TH ANNIVERSARY EDITION —THE MOST IMPORTANT AND INFLUENTIAL SCIENCE FICTION NOVEL OF THE PAST TWO DECADES Twenty years ago, it was as if someone turned on a light. The future blazed into existence with each deliberate word that William Gibson laid down. The winner of Hugo, Nebula, and Philip K. Dick Awards, Neuromancer didn't just explode onto the science fiction scene—it permeated into the collective consciousness, culture, science, and technology. Today, there is only one science fiction masterpiece to thank for the term "cyberpunk," for easing the way into the information age and Internet society. Neuromancer 's virtual reality has become real. And yet, William Gibson's gritty, sophisticated vision still manages to inspire the minds that lead mankind ever further into the future.

Description:
Ace. Very Good+ in Very Good+ dust jacket. 2004. First Printing. Hardcover. 0441012035 . FIRST PRINTING of this 20th Anniversary Edition. With a new introduction by Gibson. Full number line. An excellent copy but for bumps to the spine ends. All else is nearly fine. Unmarked and tight. The dust jacket has only minimal wear. Some crimping to the spine ends. There is a narrow streak of some kind of residue toward the lower, rear cover. This was difficult to see at first. Not price clipped. ; 8vo 8" - 9" tall .
Item Price
$25.00
$5.00 shipping to USA