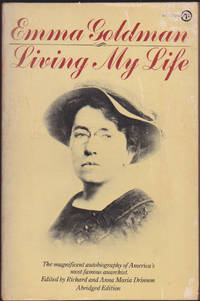 Description:
New York: New American Library / Meridian, October 1977. Trade Paperback. Fifth printing. Good+. Interior tanned, but unmarked. Spine creased. Rubbing and reading wear to covers. Not from a library. No remainder mark. Not clipped. 754 pages, 4 leaves of plates : ill. ; 21 cm.Anarchist, journalist, drama critic, advocate of birth control and free love, Emma Goldman was the most famous--and notorious--woman in the early twentieth century. This abridged version of her two-volume autobiography takes her from her birthplace in czarist Russia to the socialist enclaves of Manhattan's Lower East Side. Against a dramatic backdrop of political argument, show trials, imprisonment, and tempestuous romances, Goldman chronicles the epoch that she helped shape: the reform movements of the Progressive Era and the early years of and later disillusionment with Lenin's Bolshevik experiment, the movement to legalize birth control (she was Margaret Sanger's mentor), and the movement for women's sexual and economic freedom.
Item Price
$25.95
FREE shipping to USA