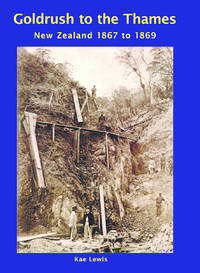 Description:
NOTE: There is an abridged version for the more casual reader but for serious historical or genealogical research this full volume id recommended.See KaeLewis.com.
Goldrush to the Thames: New Zealand 1867 - 1869
Until now, little was known about who the miners were who came to the Thames during the early days of the gold rush in 1867. Still less was known about how they went about finding gold high in the ranges behind the Thames township. They flocked in, firstly from Auckland and then from all parts of New Zealand and the wider world beyond. Before long, there were thousands of hard-working diggers frantically excavating a vast network of underground tunnels, seeking those elusive quartz leaders and reefs that contained the gold. Some struck gold bonanzas and were set for life, others burrowed for months in barren earth and spent all their savings just trying to keep themselves from starvation.
This book documents many of the early claims in Thames, Tararu, Puriri and Tapu from 1867 to 1869 and is… Read more
Item Price
$57.86
$2.17 shipping to USA