Stephen Hawking is Lucasian Professor of Mathematics at the University of Cambridge; his other books for the general reader include A Briefer History of Time, Black Holes and Baby Universes and The Universe in a Nutshell.

Description:
Bantam. PAPERBACK. 0553380168 Some coloring on the first title page and minor highlighting in a coupe of the middle chapters. . Very Good.
Item Price
$8.25
$3.99 shipping to USA 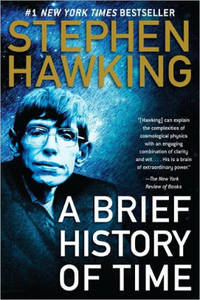 Description:
A Brief History of Time: From the Big Bang to Black Holes by Stephen HawkingA Brief History of Time, published in 1988, was a landmark volume in science writing and in world-wide acclaim and popularity, with more than 9 million copies in print globally. The original edition was on the cutting edge of what was then known about the origins and nature of the universe. But the ensuing years have seen extraordinary advances in the technology of observing both the micro- and the macrocosmic worldâ€”observations that have confirmed many of Hawking's theoretical predictions in the first edition of his book.Now a decade later, this edition updates the chapters throughout to document those advances, and also includes an entirely new chapter on Wormholes and Time Travel and a new introduction. It make vividly clear why A Brief History of Time has transformed our view of the universe.
Item Price
$12.00
$4.99 shipping to USA

Description:
Bantam, October 1998. Trade Paperback . New. We carry new and used books in our storefront. We want you to be satisfied with your purchase. Please contact us if you have questions regarding this item.
Item Price
$18.00
$4.50 shipping to USA