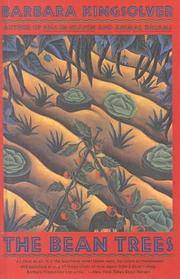 Clear-eyed and spirited, Taylor Greer grew up poor in rural Kentucky with the goals of avoiding pregnancy and getting away. But when she heads west with high hopes and a barely functional car, she meets the human condition head-on. By the time Taylor arrives in Tucson, Arizona, she has acquired a completely unexpected child, a three-year-old American Indian girl named Turtle, and must somehow come to terms with both motherhood and the necessity for putting down roots. Hers is a story about love and friendship, abandonment and belonging, and the discovery of surprising resources in apparently empty places.Available for the first time in mass-market, this edition of Barbara Kingsolver's bestselling novel, The Bean Trees, will be in stores everywhere in September. With two different but equally handsome covers, this book is a fine addition to your Kingsolver library.

Description:
Turtleback. Used - Good. Former Library book. Shows some signs of wear, and may have some markings on the inside.
Item Price
$31.15
FREE shipping to USA

Description:
Turtleback. Used - Good. Shows some signs of wear, and may have some markings on the inside.
Item Price
$32.48
FREE shipping to USA