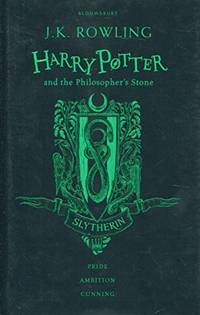 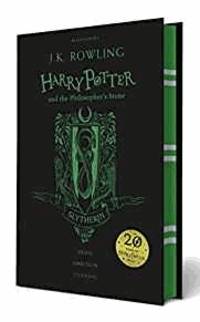 Description:
Bloomsbury, 2017. First UK edition-first printing of this 20th anniversary edition. Hardcover. New/New. Mint condition. Bloomsbury, 2017. 20th Anniversary Edition. First UK edition-first printing of this 20th anniversary edition (1 3 5 7 9 10 8 6 4 2). Black hardback (green lettering to the spine) with Dj(small nicks and crease on the edges of the Dj cover), both in mint condition. Illustrated with b/w drawings,map. Illustrations by Levi Pinfold. The book is new. 359pp including Slytherin: An Introduction, J.K. Rowling- Twenty Years of Magic,Price un-clipped.
Book Description: Celebrate 20 years of Harry Potter magic with four special editions of Harry Potter and the Philosopher's Stone. Gryffindor, Slytherin, Hufflepuff, Ravenclaw . Twenty years ago these magical words and many more flowed from a young writer's pen, an orphan called Harry Potter was freed from the cupboard under the stairs - and a global phenomenon started. Harry Potter and the Philosopher's Stone has been read and loved by every… Read more
Item Price
$68.33
$25.33 shipping to USA