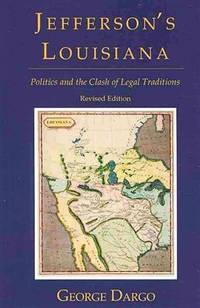 Description:
2009. ISBN-13: 9781616190200; ISBN-10: 1616190205. New Revised Edition of "A Triumph of Historical Scholarship" Dargo, George. Jefferson's Louisiana: Politics and the Clash of Legal Traditions. Revised Edition. Clark, NJ: The Lawbook Exchange, Ltd., 2009. xxxvi, 331 pp. ISBN-13: 9781616190200; ISBN-10: 161619025. Hardcover. New. $49.95 * The Purchase of all of Louisiana in 1803 brought the new American nation into contact with the French Creole population of the Lower Mississippi Basin. While the settlement in and around the city of New Orleans (the capital of the province when it was ruled by Spain) was not large, it had well established governmental and legal institutions. The question of which system of law-Louisiana civil law or Anglo-American common law-would prevail in this volatile corner of the North American continent was one of the most vexing problems that confronted the Administration of Thomas Jefferson. That Louisianians would remain committed to their civil law heritage was by no means… Read More
Item Price
$49.95
$9.00 shipping to USA