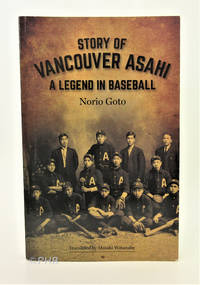 Description:
Vancouver, BC, Canada: Asian Canadian Studies Society, 2016. Soft cover. Near Fine. 8vo - over 7¾" - 9¾" tall. 242pp. Illustrated w historical bw photographs. Photo illustrated wrapper is clean and without wear. Binding square and not creased. Small octavo: 211 x 137mm. First published in Japan by Iwanami Shoten, 2016, this is the first Canadian edition in English translation by Masaki Watanabe with the publishing assistance of Grace Eko Thomson and Elmer Morishita, Vancovuer, 2016 Norio Goto's exhaustively researched book captures the development of this legendary Japanese-Canadian baseball team from their early struggles to their ascension as league champions, to the internment years and beyond.
Item Price
$31.99
$18.40 shipping to USA

Description:
Vancouver, BC: Elmer Morishita, Grace Eiko Thomason, 2016. No rubbing, bumping or shelfwear to covers. Spine straight and uncreased. Interior tight and unmarked except an inscription on the title page, the signature to which, in Kanji, is Masaki, the first name of the translator Masaki Watanabe The book is a history of the Asahi team from its inception in 1914 until its dissolution in 1941, at which time, two years into WW2, many of its then members were forced into internment camps in the BC interior. 242 pp.. Dedicated by Author. First English. Trade Paperback. Fine/No Jacket as Issued. 8vo - over 7¾" - 9¾" tall.
Item Price
$39.19
$23.19 shipping to USA