Description:
Library of America. Hardcover. GOOD. Spine creases, wear to binding and pages from reading. May contain limited notes, underlining or highlighting that does affect the text. Possible ex library copy, will have the markings and stickers associated from the library. Accessories such as CD, codes, toys, may not be included.
Item Price
$13.40
$3.00 shipping to USA 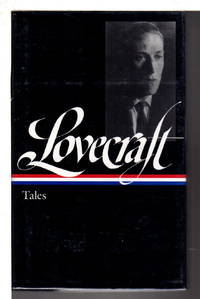 Description:
New York:: The Library of America,, (2005). Fine in fine dust jacket.. 2nd printing. Collects 22 of the best of H. P. Lovecraft's fiction from early stories such as "The Outsider" and "The Lurking Fear" which "demonstrate Lovecraft's uncanny ability to blur the distinction between reality and nightmare, sanity and madness, the human and non-human." to his later works like "The Call of Cthulhu," "The Whisperer in Darkness," "At the Mountains of Madness," "The Shadow Over Innsmouth," and "The Shadow Out of Time," where he "developed his own nightmarish mythology in which encounters with ancient, pitiless extraterrestrial intelligences wreak havoc on hapless humans who only gradually begin to glimpse 'terrifying vistas of reality, and our frightful position therein'." Selected and with notes by Peter Straub. Chronology and notes. 838 pp. Ribbon marker bound in.
Item Price
$29.50
FREE shipping to USA