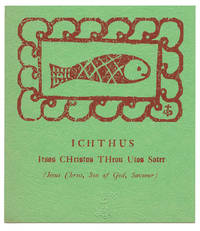 Small Uranian press broadside of the ancient Christian symbol of the fish, in a decorative border, signed in the print by Dorothea Baer Tyler with her "d.b.t." monogram. The caption prints, "ICHTHUS," the Greek word for fish, as an acronym for the Greek words for "Jesus Christ, Son of God, Saviour." No date is provided for the print, but circa 1962 is likely; that year, "ichthus" was also printed on the cover of the Uranian Press's 1962 portfolio, 9 GNOSTIC TRACTS (there, in Greek letters), in red on green paper. Dorothea Baer Tyler frequently alternated, as she does here between the initials in the print and those in her monogram on the verso, between using "Baer Tyler" and "Baer" alone.Dorothea Baer (1926-2012) cofounded the Uranian Press in 1958 with her husband, Richard Oviet Tyler (1926-1983) shortly after the two moved to New York City from Chicago, where both had attended the School of the Art Institute. By 1960, they had installed four printing presses in the basement of a Lower East Side tenement. Under the Uranian imprint, the Tyler and their friends produced chapbooks, broadsides, and artist's books through the mid-1960s. Later, they would produce photcopied flyers and zines as the Uranian Tract Society and Uranian Phalanstery. During the late 1950s and early 1960s, Tyler was a fixture in Greenwich Village in the late 1950s and early 1960s, selling the Press's wares from a pushcart in the yard of Judson Memorial Church, a nod to both contemporary Jewish peddlers of the Lower East Side and the chapmen of Elizabethan England. He played an important, if still underappreciated, role in the nascent expanded arts movements of the New York avant garde scene with both the Press and its performance arm, the Uranian Alchemical Players. The Uranian circle expanded into a quasi-religious collective incorporating Jungian and Gnostic ideas of creativity and consciousness, LSD, Western astrology, alchemy, Tibetan Buddhism, and the political thought of Charles Fourier, becoming known officially in 1974 as the Uranian Phalanstery. After the death of Richard in 1983, Baer maintained the Phalanstery until her own death in 2012; it survives today under the care of her protégé, Mehdi Matin.

First Edition
In book collecting, the first edition is the earliest published form of a book. A book may have more than one first edition in...[more]
verso
The page bound on the left side of a book, opposite to the recto page.
fine
A book in fine condition exhibits no flaws. A fine condition book closely approaches As New condition, but may lack the...[more]
New
A new book is a book previously not circulated to a buyer. Although a new book is typically free of any faults or defects,...[more]