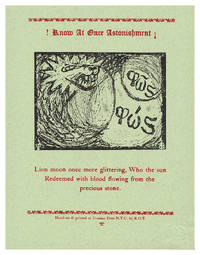 Numbered 12 of 300 copies. 9 broadsides, written by Richard Tyler, all illustrated by him with deep-etch relief prints but one, which is illustrated with a linocut by Manuel Narciza. All broadsides hand-set and printed at the Uranian Press and bearing its imprint. The folder's front leaf contains a deep-etch relief print by Dorothea Baer Tyler, who signs in the print with her monogram. Tyler introduces the contents of the portfolio with a quotation from C. G. Jung in PSYCHOLOGY & ALCHEMY: "The Christian opus is an operari in honor of God the Redeemer undertaken by man who stands in need of redemption, while the alchemical opus is the labour of Man the Redeemer in the cause of the divine world-soul slumberingg and awaiting redemption in matter." The brief tracts cover themes of energy, matter, mystical union, redemption, and transfiguration with evocative illustrations of largely astrological and astronomical subjects. Richard Oviet Tyler (1926-1983) established the Uranian Press in 1958 in the basement of a tenement on the Lower East Side where, by 1960, he had installed four printing presses. Under the Uranian imprint, Tyler, his wife, Dorothea Baer Tyler, and friends produced chapbooks, broadsides, and artist's books through the mid-1960s. Tyler was a fixture in Greenwich Village during this period, selling the Press's wares from a pushcart in the yard of Judson Memorial Church, a nod to both contemporary Jewish peddlers of the Lower East Side and the chapmen of Elizabethan England. He played an important, if still underappreciated, role in the nascent expanded arts movements of the New York avant garde scene with both the Press and its performance arm, the Uranian Alchemical Players. The Uranian circle expanded into a quasi-religious collective incorporating Jungian and Gnostic ideas of creativity and consciousness, LSD, Western astrology, alchemy, Tibetan Buddhism, and the political thought of Charles Fourier, becoming known officially in 1974 as the Uranian Phalanstery. OCLC records four copies.

verso
The page bound on the left side of a book, opposite to the recto page.
First Edition
In book collecting, the first edition is the earliest published form of a book. A book may have more than one first edition in...[more]
G
Good describes the average used and worn book that has all pages or leaves present. Any defects must be noted. (as defined...[more]
fine
A book in fine condition exhibits no flaws. A fine condition book closely approaches As New condition, but may lack the...[more]