Biblio.com talks with Philip Beard, author of Dear Zoe, about golf, his latest novel, and how a fortune cookie changed his career.

Biblio: Tell us the story of how you left a successful law practice to enter the unpredictable world of writing and publishing.

Even though I wrote a great deal during both college and law school, I stopped completely once I started practicing law. There was no time, and when I got married to a woman who had a child from a previous marriage, I had an instant family. I didn’t write a thing for ten years, and it was really starting to get me down. Then my wife and I were in our favorite Chinese restaurant one night, and I was on a rant about the lack of creativity in my life when our fortune cookies arrived. Mine said (I am not making this up): “You are a lover of words. Someday you will write a book.” Never one to ignore obvious signs, I went to part-time status at my firm and started work on my first novel. I finished the manuscript in about a year and was very fortunate to find a great agent to represent it. I thought I was set. My agent submitted my novel to 27 different New York publishing houses; all of them rejected it. Then I wrote , and the same thing happened again: twenty-seven submissions; twenty seven rejections. This was in early 20003, and I was told: “New York isn’t ready for a 9/11 novel yet.” I was completely demoralized. I had never failed at anything, and now I was failing at the only thing I really wanted to do. After a few months of feeling sorry for myself, I saw an article in the NYT about the rise of self-publishing, and I decided to take back control of my career. I spent 6 months treating the publishing of Dear Zoe as my full time job, hiring a cover artist, a printer, a publicist and convincing a national distributor to take it on. Sometime during this process, I gave the manuscript to an indie bookseller in my neighborhood who told me that his Penguin sales rep was coming to town the next week: an up-and-coming guy who had the ears of the editors there. I told him I was pretty sure every Penguin imprint had already rejected Dear Zoe, but gave him the manuscript anyway. Long story short, the sales rep loved it and put it directly on the President of Viking’s desk. She loved it too and called me with an offer exactly one day before I was to write a big fat check from my kids’ college fund to the printer I had hired. A month later I was featured in the “Hot Deals” column in Publishers’ Weekly. Unbelievable. If any of your readers are interested in the long version (which gets even more bizzare) the entire publishing backstory is on my website.

Your current project is the recent paperback release of Lost in the Garden. This novel was actually written before Dear Zoe. Did you have any concerns about following Dear Zoe, which received critical acclaim, with your first novel?

I wasn’t concerned about the quality of the work so much as the fact that the novels are so different. I will never be a writer who comes up with recurring characters or some kind of series. I get bored too easily. I knew that it would be a real challenge for Viking to market Lost in the Garden as being “by the author of Dear Zoe” because the books have almost nothing in common other than their author. 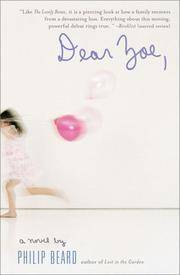 Both of these books are driven by very powerful narrative voices: one is a fifteen year-old girl, and the other is (if you don’t mind the frank summary) a sex-and-golf-driven middle-aged man. Which came first: these characters, or their plots? Did you draw on your own experience with your family for the voice of Tess in DZ?

Okay, maybe the books do have something in common. Writing almost always begins with voice or character for me, never plot. Outlining would take all of the fun out of the writing process. The only things I know when I start are who my main characters are and what they are trying to overcome. Everything else flows from there, and I try to show up for work every day prepared to be surprised.

The voice of Tess began with my stepdaughter, Cali. I have kept a notebook in my pocket since I was eighteen, and when Cali was an adolescent, I found myself taking lots of notes in her voice. She seemed to occupy very difficult but fertile space, both as a teen trying to come of age and a member of a blended family. At the same time I was taking a lot of notes about some local tragedies involving young children. Once Tess began talking to one of those children, and once I realized it was her sister, I began to feel as if I had a book.

Dear Zoe is now being recommended as part of the reading curriculum for schools and colleges. What do you hope students will learn from reading that text?

That they love to read. I don’t read fiction to learn; I read to be moved–by characters, by story, by language–so my only hope is that students (and all readers) will identify with Tess and be moved by her story.

What’s next for you?

I’ve just finished a draft of a new novel about a writing professor looking back on the year he turned ten, when he befriended a man with no legs who changed his life. It’s tentatively called The Swinger, because that’s how the man gets around: by placing his hands on the ground and swinging his torso forward as if he’s on a set of parallel bars. Early feedback from my few trusted readers has been very strong, so I’m hoping to have it ready for submission by fall. This is the first time I’ve mentioned the new book in a public forum!

What are you currently reading?

TALK, TALK by T.C. Boyle, one of my favorite writers.

Been playing any golf this past summer? What was your best score?

Hardly at all, I’m sorry to say. I played a lot more golf when I was a lawyer. It was a form of release for me. Now when I’m on the golf course, I feel as if I should be writing, so I tend to play all of my golf now when I’m vacation. My best score on “real” golf course is 70. I’ve done it twice (both years ago) and blew a chance at 69 both times. That is one thing that my narrator in Lost in the Garden and I have in common.

PHILIP BEARD is a 1985 Phi Beta Kappa graduate of Colgate University and a 1988 graduate of the University of Pittsburgh School of Law. For ten years, Mr. Beard was a partner in the law firm of Stonecipher, Cunningham, Beard & Schmitt, where he is still Of Counsel. His first novel, Dear Zoe, was a Borders “Original Voices” selection, a Book Sense pick, and was named by the American Library Association’s “Booklist” as one of the Ten Best First Novels of 2005. His second novel, Lost in the Garden, released by Viking in 2006, was nominated for the USGA’s International Book Award. Mr.Beard lives in the Aspinwall section of Pittsburgh with his wife, Traci, and their three daughters.