Ever wanted to visit a real haunted book shop? The Book House might be your next (or last) stop when passing through St. Louis. 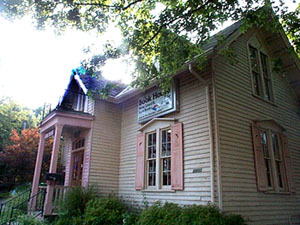 The Book House is an open shop located in the St. Louis, Missouri area. They have been in business for over 20 years as a shop, a booksearch company, and an online store under the ownership of Michelle Barron and her family.

There are a lot of bookstores around the St. Louis area, but only one can boast being home to a ghost named Valerie. Valerie is just one of a few ghosts that live at The Book House, a rare bookstore housed in an old Victorian farmhouse located at 9719 Manchester Road in Rock Hill. Legend says Valerie is a little girl that lived in the home in the early 1880s.

The Book House building, an early Gothic-revival farmhouse, was built in 1865 before the Civil War. The house orginally belonged to a shipboat captain, George Keith. During the late 1800’s the farmhouse housed temporary boarders and doubled as an inn. Legend has it that the “inn” was also a brothel. The Thompson family bought the property in the 1920’s and remain as the current landowners. At one point a doctor used to operate his practice in the house and also ran a “dying room,” hospital and morgue there as well. In the 1960’s the house was rented out to a family who ran a wedding chapel in the same room. Through the 1970’s and 80’s it was the Craft Manor–an antique and craft shop, and eventually turned over to a flower shop. The Book House moved into the farmhouse and opened business in 1986.

Spirits of St. Louis A Ghostly Guide to the Mound City's Unearthly Activities

Stock Photo
10 copies starting at $ 6.57
It is believed that Valerie, the little redhead ghost, drowned in a well on the property. No one can confirm whether her death was an accident or murder. Valerie’s body may still be buried near the house. Employees and customers have heard Valerie giggling as she moves around the books in the store, climbs onto the roof and sometimes turns the lights on and off. She has even been seen walking past the windows.

While Valerie is a friendly ghost, there’s another not-so-friendly spirit that has taken up residence at The Book House. The Dark Man, as he has been named, does not show up as often as Valerie, but when he does it’s usually very late at night. People have reported walking into the basement or heading up the stairs only to find the man standing there and dressed all in black. Those that have seen him say he’s usually accompanied by cold air and a sense of fear and that even Valerie seems to be scared of him.

A third ghost, called the Smoking Man, showed up approximately five years ago. It’s believed the spirit came in attached to some books donated to the store from an estate. He has been seen walking around the store smoking his pipe. Employees have had to call the fire department when he first showed up because they were afraid there was a fire in the store–the smell of smoke was so strong.

It’s just another day at the office for the employees at the Book House. Do you have a ghost haunting your business or home? Share your stories below!