A book review by Peter Coveney of Fine Books & Collections magazine of “A Penguin by Design: A Cover Story” by Phil Baines.

by Peter Coveney, courtesy of Fine Books and Collections 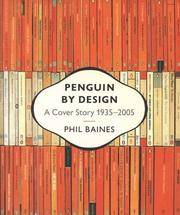 Penguin by Design: A Cover Story, by Phil Baines

Penguin Books turned seventy in 2005, and this attractive volume celebrates its strong design tradition across the decades and gives a brief history of how the company’s editorial and design visions have been intertwined. Graphic designer Phil Baines organizes the story around five major time periods, the first three of which bear the stamp of founder Allen Lane’s strong hand and excellent taste. Color images of more than 600 covers reinforce the text, giving it more the feel of an exhibition catalog than a history.

Penguin was launched in 1935, by Lane and his brothers Richard and John, as an offshoot of British publisher the Bodley Head. The early years, 1935 to 1946, were devoted to getting the business on its feet and establishing a brand. This period saw amusing variations in the famous Penguin logo and the introduction of a number of innovative series, each distinguished by their name and subject matter–the Pelican line, Penguin “Specials,” King Penguins, a series on modern painters, and Penguin Classics. By the end of Penguin’s first year, it had sold three million books, though the company might very well have gone belly up if it hadn’t, in Baines’s words, “perfected the balance” of “price, convenience of format, and excellence of scholarship…combining design and sound writing to such good effect that after only ten years the name Penguin and the word paperback…were synonymous.”

The period from 1947 to 1959 was characterized by the arrival of designer Jan Tschichold and his successor, Hans Schmoller. Together, they inaugurated the golden age of design at Penguin. The already distinctive look–fine typography influenced by European modernism–applied craft standards to a mass-market product. Most paperback publishers at the time were happy to use any typeface; Penguin’s exercise of taste and restraint in the deployment of type and color made their books stand out in a market of increasing visual clutter. This is evident in the design of the Penguin Classics, with their distinctive roundels, and in beautiful covers for series devoted to music scores, poetry, handbooks, and Nikolaus Pevsner’s notable series, “The Buildings of England.”

The 1960s were largely a time of experimentation with cover design, reflecting the lively turmoil in all the arts, as well as a period of increasing competition and a decline in Penguin design. Following Schmoller’s departure (after twenty-seven years), the period from 1970 to 1995 saw a huge amount of experimentation with covers, logo placement, and series identity. Baines brings the story up to the present in the fifth chapter, covering 1996 to 2005, in which the redesign of the Penguin Classics and the Modern Classics represented, in some respects, a return to their more traditional design roots.

The book is attractively designed and richly illustrated; collectors will welcome the 645 cover images and many other photos, as well as the bibliography and short list of websites. This is book history, publishing history, and design history all combined in one very satisfying package.

This review provided courtesy of Fine Books & Collections magazine. All Rights Reserved. For subscription information about the magazine, please visit their website.