by Scott Brown, courtesy of Fine Books and Collections 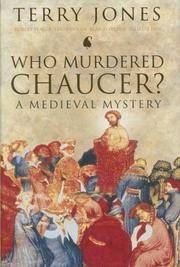 Who Murdered Chaucer? A Medieval Mystery

Terry Jones’s interest in the Middle Ages dates to his days at Oxford, before he became famous as a member of British comedy troupe Monty Python. After the huge financial success of the film “Monty Python and the Holy Grail,” which Jones starred in, co-wrote, and directed, he took a year off to write a well-received book about The Canterbury Tales. That study left him wondering about the details of Geoffrey Chaucer’s life and the story of his death.

His new book, Who Murdered Chaucer?, developed from a “coroner’s inquest” into the poet’s death held at the Sorbonne in 1998. To make his case for foul play, Jones creates a compelling picture of life in fourteenth-century England, a period when the arts flourished and feudalism waned. Chaucer was a member of the English court, an able administrator, and even a spy for a time. During his lifetime, he was also the best-known writer in England. Yet despite his prominence, he completely disappears from the historical record after June 5, 1400, when he signed for a payment of five pounds.

Less than a year before, his benefactor Richard II had been overthrown in a coup led by Henry Bolingbroke, who became Henry IV. With Henry’s rise to power, Thomas Arundel, Archbishop of Canterbury, used the opportunity to eliminate the religious freedoms that Richard II had tolerated. In Jones’s view, Chaucer’s association with Richard II and his depictions of the clergy in The Canterbury Tales would have made him an enemy of the bloodthirsty Arundel. Jones suggests that no mention was made of Chaucer’s death because his contemporaries were afraid to write about it, and so little of Chaucer’s work survives from his lifetime because it was destroyed along with everything else from Richard II’s court.

Jones’ impassioned arguments, drawn from careful textual analysis, examinations of early manuscripts, and historical records should challenge other scholars to reexamine the question. His book never fails to be interesting, and its integration of color images alongside the text is a real pleasure. If Jones’ prose slips into cliché from time to time, Who Murdered Chaucer? is still a fine example of what dedicated amateurs can bring to book history and is a model that any committed book collector can follow.