A review of Graham Greene’s 1943 novel, The Ministry of Fear, and how it spotlights used bookstores. 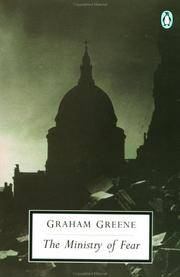 The Ministry of Fear, by Graham Greene

Published in 1943 by prolific writer Graham Greene, The Ministry of Fear begins with the protagonist’s visit to an afternoon fete, replete with nostalgia for childhood innocence and security.

“Arthur Rowe turned over the books and found with an ache of the heart a dingy copy of The Little Duke. He paid sixpence for it and walked on.”

A few pages later, Arthur Rowe’s life in rented rooms is compared to a man camping.

“Any books there were from the two-penny or the public library except for The Old Curiosity Shop and David Copperfield, which he read, as people used to read the Bible, over and over again, til he could have quoted chapter and verse, not so much because he liked them as because he had read them as a child, and they carried no adult memories.”

In the first part of the book, Arthur Rowe is haunted by memories, with guilt and grief isolating him from past friends, society and peace of mind.  Later the protagonist, while imprisoned in an asylum which pretends to protect him, he struggles with loss of memory.

Greene divided his fiction into novels and less serious works which he labeled Entertainments. Although this work is designated an Entertainment by Greene, The Ministry of Fear, set in London during the Blitz of World War II, extends and explores complex and serious dark sides of human nature, beyond my idea of an “entertainment.”  That said, it’s an engaging, readable book with beautiful prose.

At the end of the book Greene throws in a bitter psychological twist.  Many readers take Greene’s word about its finality, but I do not.  His characters have years of life ahead with opportunities for change as their inner spirits and the tides of circumstance guide them.

By the end of this book I had grown very fond of main character Author Rowe.  His story is a wonderful example of a man with an inner moral compass – a quiet, gentle and self-reliant man, seemingly reticent, even passive, but he does not lose sight of his resolve to pursue a web of wrongs.  His bravery is exemplary.

I intend to keep my second-hand copy of The Ministry of Fear close by.