A profile of Quentin Blake, a modern British illustrator whose distinct style is well known, especially for his work in children’s literature. 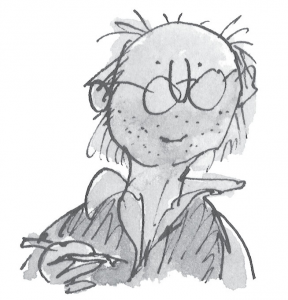 Quentin Saxby Blake was born on December 16, 1932, in Sidcup, Kent, England, UK.  This British illustrator is best known for his illustrations done for the works of Roald Dahl, as well as Michael Rosen, Russell Hoban, Joan Aiken, John Yeoman, and more.

Blake was first published at the age of 16, with a drawing for the satirical magazine Punch. He was a student of Downing College, Cambridge (1953-6), received his postgraduate teaching diploma from the University of London, and also studied at the Chelsea School of Art. He gained another teaching diploma at the Institute of Education before working at the Royal College of Art.

Blake earned a good reputation as a reliable and humorous illustrator of over 300 children’s books, and he wrote over 35 of those he has illustrated.  He taught at the Royal College of Art for over twenty years and was head of the Illustration department from 1978 to 1986.

For many years he taught at the Royal College of Art, where he was head of the Illustration Department from 1978 to 1986. He has won many awards and prizes and was made a CBE in 2005. According to The Guardian, he was ‘already a national institution’ when he was appointed the first Children’s Laureate in 1999. Since then he has had an additional career as an exhibition curator working in galleries in London and Paris among others.

Blake’s distinct style uses fast, scribbly ink lines that seem to make his characters move when you first glance at the page, but under the layers of thin lines is a depth that is held up with a precise underlying stroke. His spontaneous-feeling art lends itself to whimsical stories and much of his illustration is used in children’s literature.

Some of the awards Quentin Blake has received over the years:

Quentin Blake remains quite involved in charity work.  Downing College’s Blake Society, their arts and humanities group, bears his name as their patron. He is also a patron of “The Big Draw,” a project which encourages UK residents to experience the art of drawing as expression.  Blake supports The Nightingale Project, a charity that puts art into hospitals, and he has produced work for several hospitals and health centers in both London and Paris.