Massive changes to the publishing and bookselling industries now force us to look at which companies have merged, and which companies have gobbled up smaller stores, or simply destroyed any competition blocking their paths. We’ve been asking ourselves this question: What online book alternatives to Amazon remain?

How can we help support a vibrant, diverse used and rare book industry in a time like this?

Since reading this New York Times article on mom-and-pop bookstores, I’ve been asking myself this question a lot recently.

We all know about Amazon.com. The website giant has made plenty of headlines since it began in 1995, but only in recent years have we experienced in mass media what is coined as “AmazonFAIL,” or wide backlash against one of the largest online retailers in the world. Last month, Goodreads–now the largest website for reading communities and book recommendations–announced their decision to cut ties by severing their API data feed with Amazon and switching to Ingram to source book data. Even Barnes & Noble–a corporation that put many local bookstores out of business–said, after the big A’s recent partnership with Houghton Mifflin Harcourt to distribute print books, that they will not carry Amazon print titles in their stores. Amazon has also been under public scrutiny for their refusal to collect state sales tax in several states, for committing severe mix-ups by not making books or book categories found “offensive” available to browse or buy (which began the #AmazonFAIL Twitter hashtag), and now for the latest rumor that Amazon may open its own physical storefronts. (2017 Update: They did, and they are awful.)

But let’s focus on the online book industry, which has undergone dramatic consolidation over the past five years. As a result, most of the once-great independent companies such as Abebooks and Bookfinder have been purchased by and ushered under the Amazon corporate umbrella.

Of course this narrows the choices now available to booksellers and customers and creates a less competitive online book market.

But choices remain. They’ve been there for a long time, working in the background, providing ways for both customers and booksellers to help maintain that vibrant and healthy market for used and rare books online.

There are those of us–the entire staff at Biblio included–who still feel strongly about supporting independent businesses and ensuring fair competition.  In April of 2011 we put together the following “substitution” list, which notes just a few of the many great indie businesses which have consistently delivered top-notch services internationally over the years without multi-billion dollar marketing and/or operating budgets.

Take a look at the list. I strongly encourage any and all independently-owned and operated bookstores & book-related companies to step forward in the comments section.

Instead of these Amazon subsidiaries:

*These book searches  provide customers with books supplied only by bookseller members of those particular organizations.

Remeber, you can always go to your local bookstore if you are lucky enough to have one! Use the Biblio Bookstore search to find our booksellers in your area, or use IndieBound to find bookstores who stock new books near you. 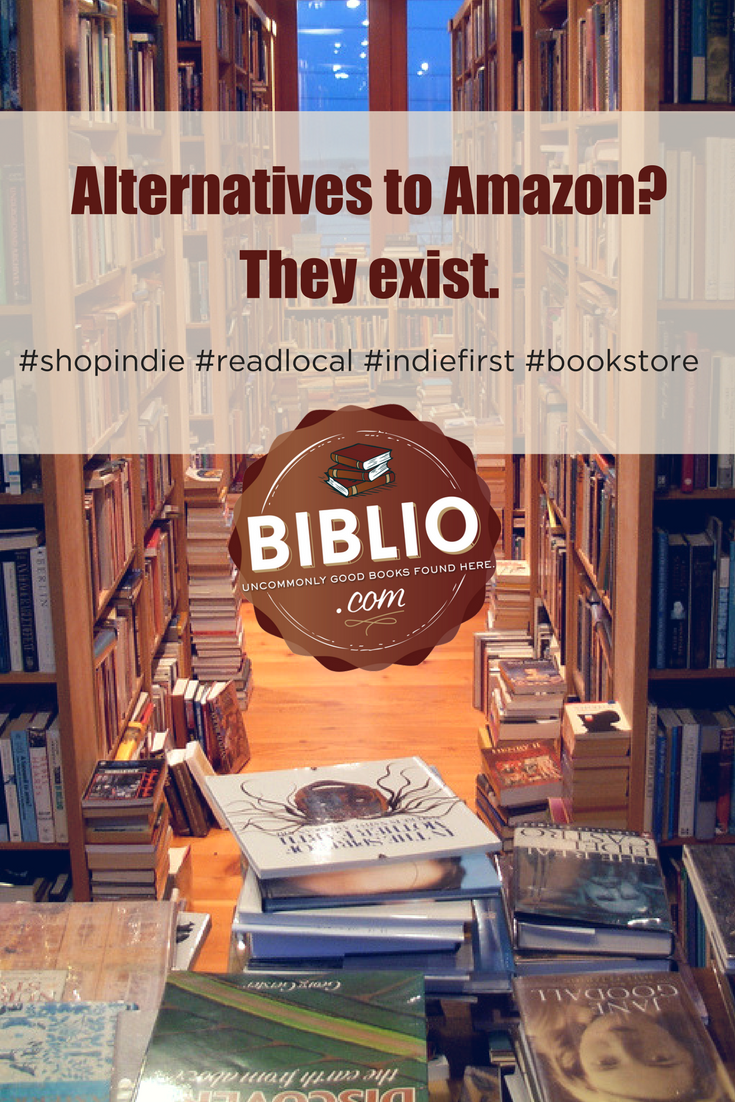