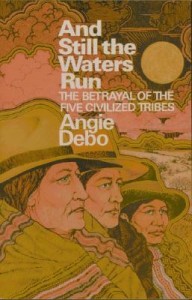 And Still the Waters Run: The Betrayal of the Five Civilized Tribes

In her groundbreaking work, historian Angie Debo challenged convention and exposed the exploitation of Native Americans in Oklahoma from the end of the Civil War through the 1920s. Published in 1940, Debo’s thorough use of documentary evidence provided the first thorough scholarly examination of these events. Debo argues that monied interests systematically despoiled the Five Civilized Tribes of their sovereign territory and political power, and stripped the members of those tribes of their mineral, agricultural and land wealth. Debo chronicled the transition from Native American communal land tenure through the allotment process, and described in detail the effort to seize land and resources at every stage. Her work examined the dissolution of tribal governments after Oklahoma statehood in 1907, and the gradual disappearance of Native American political influence in Oklahoma.

Though her work is considered foundational by scholars of Native American history, her sharp criticism of leading citizens and institutions in Oklahoma led to her being banned from teaching in the state for many years. Debo devotes over half of the book to problems with allotment. In addition to her concerns over corruption in the allotment process, Debo repeatedly details the exploitation of Indian children. Orphan children lost control over their allotments in large numbers. Debo details the complexity of the years between statehood and World War I in great detail. Her research provided the first factual scholarly narrative of the events of this period. She successfully challenges many assumptions of white superiority and directly contradicts the conclusions of her contemporary Frederick Jackson Turner about the nature of the frontier in America. Today she is celebrated as one of the greatest historians from Oklahoma, and is revered both by scholars and political leaders from the state.

Purchase a reading copy of And Still the Waters Run from Biblio today.