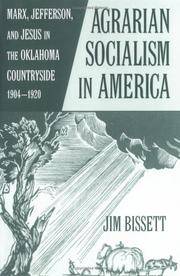 Historian Jim Bissett argues that socialism became a powerful and influential political force in early twentieth century Oklahoma. He contends that the populist legacy of the 1890s left a cadre of trained activists. These individualists demanded a democratic variety of socialism atypical of the Socialist Party in the United States. A synthesis that blended a Marxist critique of capitalism with the American ideal of the yeoman farmer and many teachings of evangelical Christianity helped socialism gain support in rural Oklahoma in ways unlike other areas of the United States. Bissett further argues that the Socialist Party developed as a native Oklahoman institution rather than one imported wholesale from outside the state. Bissett’s book first examines in detail the rise and fall of the Indiahoma Farmer’s Union, an important organization spanning both the Oklahoma Territory and the Indian Territory in the first years of the twentieth century. His analysis of the political struggles of this union both internally and against the status quo demonstrates its importance in shaping the attitudes and honing the skills of union members. Controversy over tactics arose between rank-and-file members and large landowners who came to dominate the elected leadership of the union. By the time that the Oklahoma and Indian Territories joined and achieved statehood the union’s power had dissipated and agrarian activists began to find a new home in the Socialist Party.

Land issues predominated, and by 1912 the Oklahoma Socialist Party supported private land ownership by individuals as official policy. After 1912 leaders decentralized party authority so that local party organizations much autonomy. In 1912 Eugene V. Debs, the Socialist Party candidate for president, won sixteen percent of the popular vote in Oklahoma. Their success frightened the Democratic and Republican parties enough that they passed a “New Election Law” making it more difficult for tenant farmers to register to vote. The rules restricting the election of socialists only foreshadowed far more direct suppression during the war years. Declaration of war in April of 1917 and the passage of the Conscription Act in June of that year led to an armed revolt. A sheriff’s posse and the state militia ended the Green Corn Rebellion very quickly. The federal government used the recently passed Espionage Act of 1917 to prosecute many who had nothing to do with the Green Corn Rebellion. Bissett concludes that “nowhere else in the United States did socialist activists succeed in making the European doctrines of Marxism speak so unambiguously in American terms.” (185-86)

Bissett presents important events and organizations not elsewhere analyzed. Oklahomans adapted socialism to their own circumstances, culture, and economic reality in a way unlike anywhere else in the United States. Experienced agrarian activists in the state found a resonance between socialism, yeomanry and evangelism. This synthesis formed the backbone of the movement in this unique state. Their withering denunciation of capitalism based on American ideals threatened established power and ironically led to their own destruction. New material and analysis here helped in understanding some of the complex issues of agrarian socialism in Oklahoma. This work provides important insights that will be helpful in any research project on related topics.