This is a special feature from Biblio – a glimpse into the Women’s Comic Book Club that just began in our hometown of Asheville, North Carolina.  Our newest team member, Beth, joined the club and shared her experience in reading and discussing the first book: Promethea, by Alan Moore. 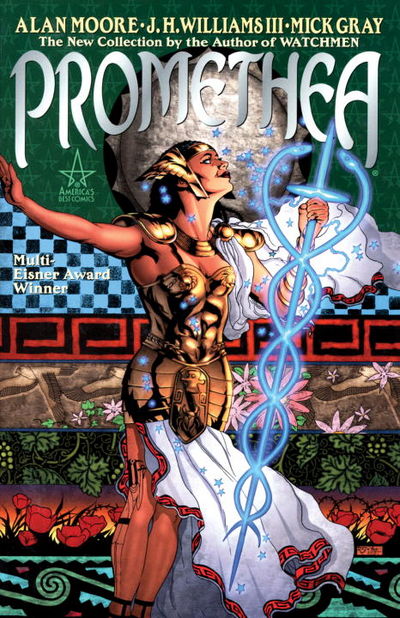 I am a member of a local women’s comic book club in Asheville, NC. The group just started in April, and our first reading assignment was Book 1 of Promethea by Alan Moore.  It was not written by a woman, nor is it a comic based on a long standing, well-known female heroine like Wonder Woman. The book we choose was based on a strong female character written by a man.

As a personal choice, I prefer graphic novels over single comic book issues. Graphic novels give you the advantage of the entire story arc collected into one book or a series of books. Graphic novels usually contain wonderful extras like forewords by the artists or other writers that admire the creator of the comic, special sketches of images from the comic, and sometimes even fun stories about the process of the comic’s creation. So on that note, we chose to read the first volume of Promethea in a collection of five graphic novels.

Promethea is about a young woman named Sophia who is in college, in a future world, researching a “fictional” female character that oddly is repeated by artist, poets, and writers throughout history. In this surreal future world resides “science heroes”, a multi-personalitied mayor, depressed pop icons, and technology-controlled realities. Sophia learns that researching this character is more of a real life adventure then a college term paper. Through studying Promethea, she becomes Promethea – a female hero of the immateria or imagination, a female deity of dreams and art. Promethea is made of magic and being made of magic means learning what magic is. As the story grows, Sophia morphs into this deity and learns about many schools of spirituality and her own identity. Adventures ensue dealing with the enemies of the many other versions of Promethea, out to make sure she does not change reality. This story line is amazing, the artwork is gorgeous, and the main character is a strong, determined female. I highly recommend this graphic novel series to anyone interested in female characters, spirituality, or comics that involve more then just a super hero and a super villain. Be ready to have your research materials at hand to understand some of the concepts that Alan Moore explains in the series. And be ready to open your mind to take in the lavish storyline, allowing your imagination to play.

The first meeting of the Women’s Comic Book Club was ill attended, sadly. One participant stated that while she enjoyed the book, she was new to comics in general. Another woman who attended the meeting said that she did not like this particular comic series by Moore, but enjoyed his other series such as V for Vendetta and League of Extraordinary Gentlemen.  I questioned the woman for her reasons for not enjoying the series and she stated simply that the series did not interest her. Well, taste is relative to every reader.  I have read the entire Promethea series and have fallen in love with the character and her development.

At the close of the meeting we decided on Y! The Last Man by Brian K. Vaughan and female co-creator and lead penciler Jasmin Pia Guerra as the next graphic novel series to read. I will unfortunately miss this meeting due to my pending nuptials! I hope to hear what the ladies think at the next Asheville Women’s Comic Club.  If you are local and interested, join the group and we hope to see you there!