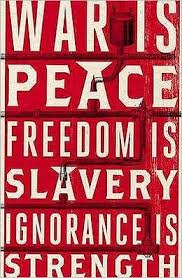 “But if thought corrupts language, language can also corrupt thought. A bad usage can spread by tradition and imitation even among people who should and do know better.”
–George Orwell, Politics and the English Language

With the telenovela that is currently starring Edward Snowden and the National Security Agency continuing to entertain us with a real life version of Where in the World is Carmen Sandiego, people from all political and social persuasions have been decrying the “Orwellian” nature of the American government and its secretive spy agencies. They shake their heads and speak of Big Brother in low voices in an attempt to sound profound. But here is the hard truth: we are not living in 1984, the NSA is not Big Brother, and there is no Two Minutes of Hate (although the Rush Limbaugh show comes pretty close).

1984 was about so much more than government surveillance, and even the all-knowing eye of Big Brother’s monitors is a far cry from the NSA mining Internet data and call logs. The true terror of 1984 was the complete and total control Big Brother had over the citizens of Oceania, both physically and mentally. The government controlled everything—from the food you could eat to the entertainment you could “enjoy”. But perhaps most importantly, the government even attempted to control the language that each person used.  By muddling down the words used by the people, the government could then further invade the consciousness of each person.

“Don’t you see that the whole aim of Newspeak is to narrow the range of thought?….The whole climate of thought will be different. In fact, there will be no thought, as we understand it now.”–1984

Words are important. They carry history and meaning and context that is vital to not just how we communicate, but to how we perceive the world around us. So when we throw around political buzzwords when they aren’t truly applicable, we dilute their meaning and insult everyone’s intelligence.

Orwell hated this abuse of language used by people in power. He believed that governments used these buzzwords to scare the populace and to manipulate them into blind acceptance of whatever the government wanted.  In one of his greatest essays, Orwell writes,

“When one watches some tired hack on the platform mechanically repeating the familiar phrases — bestial, atrocities, iron heel, bloodstained tyranny, free peoples of the world, stand shoulder to shoulder one often has a curious feeling that one is not watching a live human being but some kind of dummy: a feeling which suddenly becomes stronger at moments when the light catches the speaker’s spectacles and turns them into blank discs which seem to have no eyes behind them.”–Politics and the English Language

There are no thought police in the United States. There is no Room 101. I can protest and petition and disagree with my government without fear of imprisonment or violent retribution by the state.

If you really want to see a government that does use thought police and Room 101–a society that can truly be called Orwellian–just enjoy some time in North Korea.

Feel free to vehemently disagree with me in the comments.  I assure you that even if the NSA sees it, they won’t really care that much.