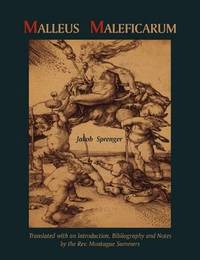 “All (Witchcraft) comes from carnal lust, which is in women insatiable.”– Malleus Maleficarum

The Hammer of Witches

If forced to choose any book to burn, I would burn Malleus Maleficarum (The Hammer of Witches). It seems appropriate, since the book caused so many women to burn at the stake.

First published in 1487, Malleus Maleficarum provided justification for the murder of thousands of women in medieval Europe. Spreading like the fire it encouraged, entire towns were left decimated by the witch trials that ensued. No book has been more damaging to the history of women than The Hammer of Witches.

Malleus Maleficarum is divided into three sections that confirms the existence of witchcraft, the evil of witches, and the prosecution of witches that will ensure their eradication. If The Hammer of Witches has a single theme, it is this: Women are naturally susceptible to the Devil’s evil, and that weakness stems from between their legs.

It was common belief that although men could succumb to witchcraft, women were inherently weaker in faith and morality, making them easier targets for devilish mischief. After all, Eve was seduced by the serpent in the Garden of Eden, thus securing the downfall of man. It seemed only appropriate to medieval villagers that the Devil could so easily rape and manipulate women, making them even more dangerous than before.

Aided by the recent invention of the printing press, Malleus Maleficarum made its way throughout Europe for three years before the Catholic Church announced the book as false and dangerous. The witch trials of course continued, and the madness would consume Europe until the early 18th century.

There is a deep seated fear of the female body, one that is ingrained in Western culture because of books like Malleus Maleficarum. Strange women have strange bodies that do strange things that make men faint in delivery rooms. We bleed for days and have powers of intuition. And yet, of course, women are supposedly weaker and less intelligent than men. We get “hysterical” and have less upper body strength. So women need to be controlled, but not just because they need to be protected, but because the strength of men needs to be guarded from the seduction of women. After all, devious women with their wily ways only seem to torment and entrap otherwise strong and good-hearted men.

I love books, but if I had a chance to burn Malleus Maleficarum, I might even dance around the bonfire to a witchy little tune.