More than 150 years after her death, Emily Dickinson is still a profound voice in American literature, with students still spending countless hours analyzing her poetry. Her poetry often focuses on themes of death and mortality, appealing to the more introspective of readers. 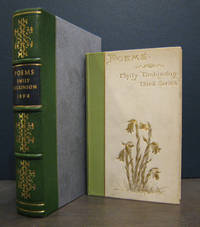 Emily Dickinson was born in Amherst, Massachusetts to a successful and well-known family. Emily’s grandfather, Samuel Dickinson, was one of the founders of Amherst College, which lead to her being one of the first women allowed to attend the prestigious school.  However, school did not appeal to Emily, leading her to return home to a more introverted and reclusive lifestyle. She greatly preferred the companionship of her dog Carlo, her sisters, her brother Austin, and her beloved father.

Being a compulsive writer, she jotted down thousands of poems and letters in her chosen seclusion from the rest of the world. Interestingly, Emily Dickinson did not write titles for any of her poems. Instead, publishers often use the first line of each of her poems as the titles.  Here is one of her most famous works:

“Hope” is the thing with feathers

“Hope” is the thing with feathers—

That perches in the soul—

And sings the tune without the words—

And never stops—at all—

And sore must be the storm—

That could abash the little Bird

That kept so many warm—

I’ve heard it in the chillest land—

And on the strangest Sea—

Yet, never, in Extremity,

It asked a crumb—of Me.

Emily Dickinson died on May 15, 1886 with only a tenth of her poems published in journals and newspapers. Most of her collections of poetry and letters became published well after her death in 1890 by the Roberts Brothers Publishing Company.

Collectors look for first edition releases of her complied works from Roberts Brothers Publishing company. Only 500 copies were printed of the very first edition of her poetry, making the book a rare find. The second run in 1891 is highly desirable due to its gift binding by the publisher. The rarity of the first printings cause the value to increase. Other Emily Dickinson collectibles include handwritten letters to family and friends and hand-pressed flowers with poems created during her school period.  Finds such as these can fetch a fair amount in the collector market.