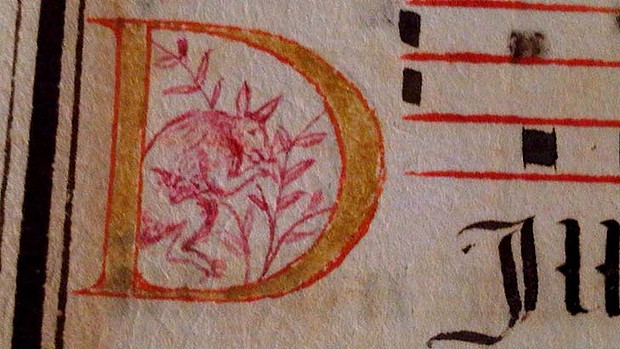 One little marsupial could change it all.

A kangaroo grasping for some leafy greens in an illuminated letter is making some researchers reconsider the commonly accepted dates of the European discovery of Australia and its people.

As reported in the Guardian, a small kangaroo or wallaby was found drawn inside a letter in a Portuguese manuscript believed to date from between 1580-1620.  This means that Portuguese explorers could have set foot on Australia before the earliest known encounter in 1606 by Dutch navigator Willem Janszoon.

Determining exactly when and where Portuguese explorers viewed and depicted this little kangaroo is not an easy task.  Portugal’s renowned secrecy about their trade routes in that time period and the destruction of many records in the 1755 Lisbon earthquake contribute to the difficulty.  There are other options as well – explorers could have encountered similar creatures in New Guinea or Papua as early as 1526, or this manuscript could have been created after records of Janszoon’s encounter with Australia reached Europe in 1606.

The small Processional is inscribed with the name Caterina de Carvalho.  This pocket-sized book of liturgical songs and prayers was acquired by Les Enluminures Gallery in New York from a rare book dealer in Portugal, and they will be sharing this piece in its upcoming exhibition Sacred Song: Chanting the Bible in the Middle Ages and Renaissance from Jan. 24 to February 21, 2014.