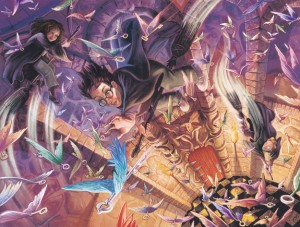 Like Cher, Madonna, and Hillary, Hermione doesn’t even need a last name to define her or her incredible influence on the world.  And she sure as hell doesn’t need to be defined by her relationship to a man.

The literary world was rocked earlier this week when an excerpt of a conversation between Emma Watson and Harry Potter author J.K.Rowling was released, in which Rowling admits that Hermione should not have ended up with Ron at the conclusion of the series.  NPR.org reports that

J.K. Rowling says she regrets pairing Ron and Hermione in the Harry Potter books. In an interview to be published in Wonderland and excerpted in the U.K.’s Sunday Times, she said, “I wrote the Hermione/Ron relationship as a form of wish fulfillment. That’s how it was conceived, really. For reasons that have very little to do with literature and far more to do with me clinging to the plot as I first imagined it, Hermione ended up with Ron.” Rowling added, “I know, I’m sorry. I can hear the rage and fury it might cause some fans, but if I’m absolutely honest, distance has given me perspective on that. It was a choice I made for very personal reasons, not for reasons of credibility. Am I breaking people’s hearts by saying this? I hope not.”

Wouldn’t it be great if Hermione could go on and become hugely successful in the magical world all on her own, without an insecure red-headed hot mess or a bespectacled dude with a Messiah complex holding her back?  Marriage counseling is expensive and it takes time away from holding war crime tribunals against Lucius Malfoy and organizing labor unions for house elves.

In what is obviously an ideal situation, Hermione and Luna could have teamed up and ruled the world, both Wizarding and Muggle.  Hermione knows how to get stuff done, and Luna would make sure that no one takes themselves too seriously.

Because truthfully, Luna Lovegood is basically the female equivalent of Joe Biden.