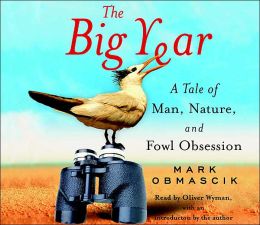 The Big Year, by Obmascik

In 1820, John James Audubon proclaimed his intent to paint every species of birds in North America. When the project was completed in 1838, Audubon had documented 506 species.

There is, of course, a scientific answer as to how many species of birds there are in North America. If one actually intends to seek them out individually – much less paint them – expect to find far fewer.

The 2008 publication of The Big Year: A Tale of Man, Nature, and Fowl Obsession by Mark Obmascik lent a good bit of credence to the difficulty in actually spotting substantial numbers of bird species. Wikipedia defines a “Big Year” as “an informal competition among birders to see who can see or hear the largest number of species of birds within a single calendar year and within a specific geographical area.” The American Birding Association defines that area, which can be loosely described as Audubon’s “North America.”

Nearly 100 years after publication of Birds of America, in 1939, Big Year participant Guy Emerson spotted 497 birds, a few shy of Audubon, albeit in a much shorter time with fewer species left on the planet. But Big Year numbers have continued to climb, to 598 in 1956 to 747 species in 2013, all of which is shy the 914 species recognized by the American Birding Association. No one has come close. 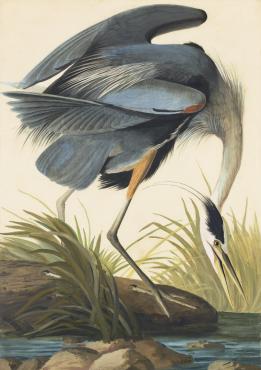 All in all, Audubon did pretty well. He documented well over half the species in North America in travel conditions that were challenging at best. More importantly, he spent time enough with them to paint them in their habitat.

Also, on April 1, Sotheby’s NY will auction two Audubon masterworks. The “double-elephant folio” first edition of the Birds of America is one of them, and its consignor, The Indiana Historical Society, hopes it will realize at least $3 million.

1838 was – and 2014 continues to be – a Big Year for John James Audubon. His enduring passion for the birds of America keeps this important natural history alive — and makes us all hopeful for having our own Big Year.

Audubon’s Great Blue Heron, on display at the New-York Historical Society, March 21-May 26.