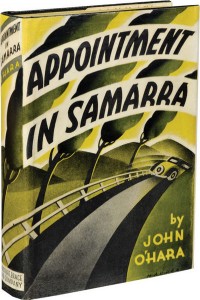 For all the remembered writers of the 20th century, John O’Hara may not be among them.  He was, however, commercial, and in his own words, he said, “I’m not some hairy philosopher. I’m just an ordinary guy who happens to write well.”

O’Hara was one of the 20th century’s best-selling authors. His biographer, Matthew J. Bruccoli, claimed O’Hara published more words than any other writer in the century. The public loved O’Hara, and he wrote for them. Critics were less kind.

Still, O’Hara knew what he was about. “The United States in this century is what I know,” he said. “I want to record the way people talked and thought and felt, and do it with complete honesty and variety.”

The Schuylkill County (PA) Historical Society, the birthplace of O’Hara, is now trying to keep O’Hara’s memory alive. The Society got an early start on preserving the history of the area, having incorporated in 1903, but only last month decided to build an O’Hara collection. Their collection began simply enough with the recent donation of two letters written by O’Hara, one dated in 1954 and the other dated in 1961, and they serve as a cornerstone for other artifacts to come from the author’s life.

Upon publication of O’Hara’s first book, Appointment in Samarra, the New York Herald Tribune wrote that, “The genuine value of Appointment in Samarra is the author’s grasp of his dubious hero’s character.” Hemingway praised the book highly and Edmund Wilson wrote that the book was “a memorable picture of both a provincial snob, a disorganized drinking-man of the twenties, and of the complexities of the social organism in which he flourished and perished.”

Last year, Penguin Classics re-issued Appointment in Samarra, and other O’Hara books have followed.  The author is finally receiving a bit of his critical due, particularly for his later works, which remain some of best portraits of the 20th century.

Please take a moment to browse:

Collectible copies of Appointment in Samarra

All First Editions by John O’Hara

Get a discounted subscription to FB&C on Biblio!