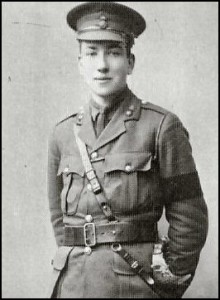 The Imperial War Museum in London is publishing a new anthology of World War I poetry in June (August in the States) entitled First World War: Poems from the Front. The anthology, edited by Paul O’Prey, a former president of the War Poets Association, aims to “challenge the notion that all war poetry was of a similar anti-war sentiment” by “focusing on 15 poets who all saw active military service and composed poems while they worked, nursed, and fought.”  The anthology will include poems from fifteen men – and women – including a previously unpublished draft of a poem by Robert Graves.

Graves’ poem “November 11th” features a scathing critique of the “thoughtless and ignorant scum” celebrating the Armistice. Graves, a veteran of the Royal Welch Fusiliers, had suffered such serious injuries at the Somme that he was left for dead. His experiences in the war left him intensely bitter.  The poem also refers to the cheering crowds as the “froth of the city,” while “the boys who were killed in battle” are “peacefully sleeping on pallets of mud.”

Graves was persuaded not to publish the poem in 1918, for obvious reasons. Graves did publish a modified, toned-down version of the poem in 1969; this new anthology will be the first time “November 11th” is published with Graves’ original voice.

“The rawness of their anger, their compassion and despair, still feels urgent today and cannot be ignored,” said editor O’Prey in an interview with The Guardian.