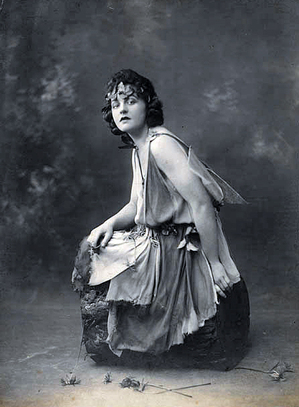 Australian-British novelist P. L. Travers wrote about her great-aunt Ellie who inspired the beloved children’s character Mary Poppins in an unpublished story in 1941. Travers printed her story, entitled “Aunt Sass,” in a run of 500 copies for distribution amongst family and friends as a Christmas gift. The publisher Virago will resurrect the story and publish it for the first time for a wider audience this Christmas as part of its Modern Classics imprint.

“Aunt Sass,” known to Travers as “Ellie” and to the rest of the world as Helen Morehead Christina Saraset (“Sass for short”) was Travers’ great-aunt and unconscious inspiration for Mary Poppins. (Travers published the first Mary Poppins story in 1934). It wasn’t until later in her life that Travers realized she had mined aspects of Aunt Sass for her famous creation.

“I thought to myself, ‘Some day, in spite of her, I shall commit the disrespectful vulgarity of putting Aunt Sass in a book.’ And then it occurred to me that this had already been done, though unconsciously and without intent. We write more than we know we are writing. We do not guess at the roots that made our fruit. I suddenly realized that there is a book through which Aunt Sass, stern and tender, secret and proud, anonymous and loving, stalks with her silent feet,” wrote Travers. “You will find her occasionally in the pages of Mary Poppins.”

The Modern Classics edition out this Christmas will include two other stories that Travers privately printed in runs of 500 copies for Christmas gifts for family and friends: “Ah Wong,” from 1943 and “Johnny Delaney” in 1944.