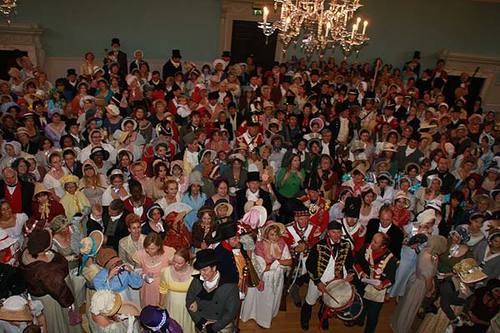 Jane Austen fans gathered in Bath, England, this past weekend to break the world record for the largest gathering of people dressed in Regency costume. (Apparently not counting the people who were actually alive in the Regency era).

With 550 men, women, and children regaled in Regency apparel in front of the novelist’s former home, the fans were pleased to learn that they broke the previous world record of 491 people. That record–in a disappointing, albeit temporary setback to British Jane Austen fans–was set in America.

After the announcement was made, light cheers arose from the stately tea rooms inside the Assembly Rooms. The town crier (Bath still employs a town crier) then loudly proclaimed the new world record in the streets.

The event was only one of many to celebrate the novelist during the annual Jane Austen Festival, which runs for 10 days every year in the city most closely connected to her name.

Beate Muller, an Austen fan from Paris, told The Telegraph, “It is not just about Jane Austen, it is about a way of life which was much more elegant, much more refined.” Muller continued, “It is a much better way of living, there was so much more style and deportment, and people lived a wonderful lifestyle.”

Muller, like the beloved novelist herself, is assumed to be commenting exclusively on the lives of the wealthy during the Regency era.