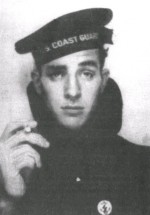 After leaving Lowell, Massachusetts, on a football scholarship to Horace Mann, a prep school in New York City, Jack Kerouac maintained a friendly and candid correspondence with his childhood friend George Apostolos. Seventeen of those letters, along with two postcards, and seven writing fragments were discovered by Apostolos’s daughter after his death and will be auctioned this fall in Boston by Skinner.

Like so many teenage boys before and after him, Kerouac spends much of his letters writing about girls: 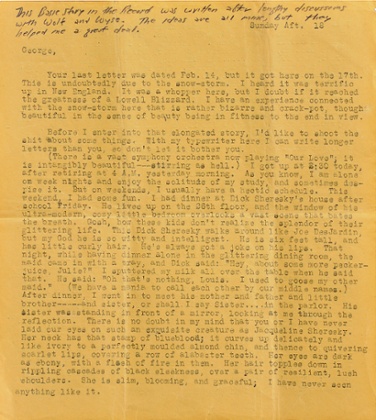 “There is no doubt in my mind that you or I have never laid our eyes on such an exquisite creature as Jacqueline Sheresky. Her neck has that stamp of blueblood; it curves up delicately and like ivory to a perfectly moulded almond chin, and thence to quivering scarlet lips, covering a row of alabaster teeth. Her eyes are dark as ebony, with a flash of fire in them. Her hair topples down in rippling cascades of black sleekness, over a pair of resilient, lush shoulders. She is slim, blooming and graceful; I have never seen anything like it.”

Kerouac’s densely typed letters – in a precursor of his later style – run in unbroken, single-spaced lines across multiple pages. In addition to various love affairs, Kerouac discusses playing football, adjusting to life in New York City, reading, writing, and developing his personal philosophies. The letters continue through Kerouac’s freshman year at Columbia University in 1940 and 1941.

Estimates for the letters, which will be sold as separate lots at Skinner’s November 16th auction of fine books, run between $2,000 and $5,000 each.