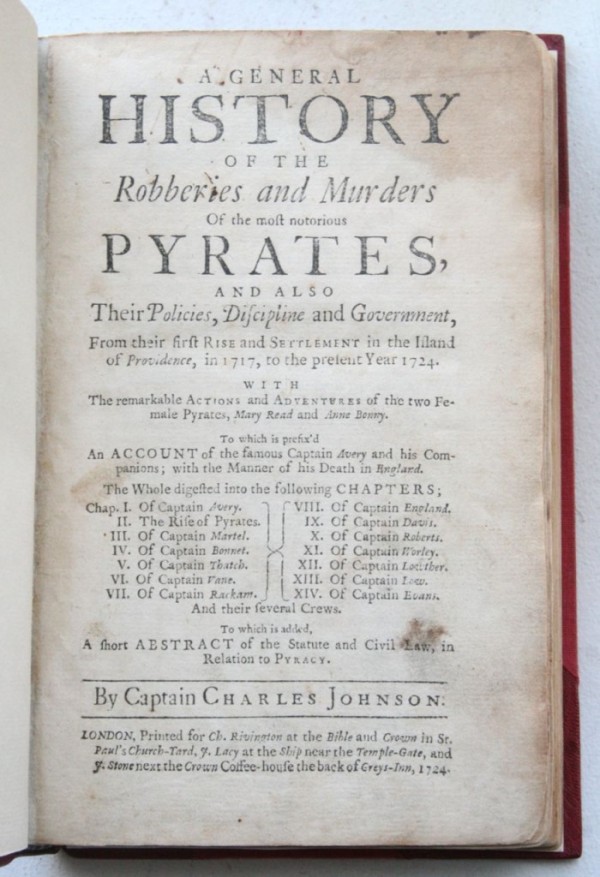 A General History of the Pyrates

You might think that our whole popular image of pirates—peg legs, buried treasure, the “Jolly Roger” flag—comes from Disney movies and amusement rides. In fact, much of that image comes from one book: A General History of the Robberies and Murders of the most Notorious Pyrates. (reprint editions here). It was published in 1724, and was a bestseller—it turns out that pirates’ entertainment value is nothing new, either. The book’s author was given as Captain Charles Johnson. However, this is usually considered a pseudonym, and debate continues about who the real author was. In addition to forming our modern conception of pirates, the book also remains our primary source for the biographies of famous pirates like Blackbeard and Calico Jack, and Anne Bonny and Mary Read—the two most famous women pirates.

A General History of the Pyrates is also a very rare book in its first edition. The book was so popular in the early 18th century that most first edition copies were worn out and have not survived. It’s difficult even to find examples of later 18th-century editions. The British Museum Library only recently acquired a first edition copy.

I was lucky enough acquire a copy of A General History earlier this summer. Rare as it was, several factors made my copy even more unusual. It included a very rare map of Guinea, inserted from the fourth edition. And, better still, an actual pirate coin was included with the set. It was a silver cob, a type of coin produced in Spain’s New World colonies, with pillars and waves on the front and a cross on the back. Pirates preferred cobs because they were accepted as currency all over the world.

In the end, I decided to use my copy of A General History of the Pyrates to test the rare book market on eBay. You can read more about that experiment on my blog. Or you can read about some other pirate-related rare books here and here.

Adam Weinberger, the founder of RareBookBuyer.com, has been involved in rare books and manuscripts for more than 30 years. We buy rare books and offer free appraisals. You can reach Adam by email at webuyrarebooks@gmail.com or by telephone at 646.469.1851.