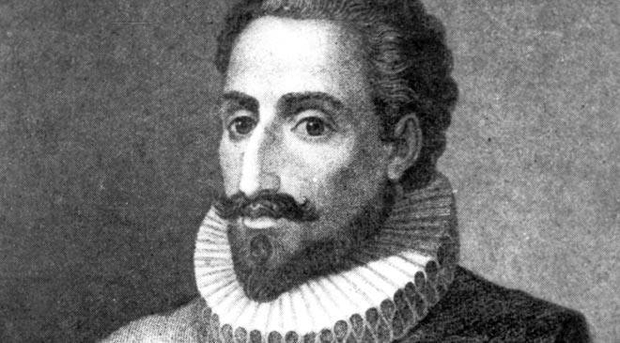 One of literature’s great burial mysteries may have been solved this past weekend when archaeologists searching for the remains of Miguel de Cervantes – the author of Don Quixote – uncovered a casket with the author’s initials.

The casket was discovered inside an alcove in the crypt at the Convent of the Barefoot Trinitarians in Madrid.

“Remains of caskets were found, wood, rocks, some bone fragments, and indeed one of the fragments of a board of one of the caskets had the letters ‘M.C.’ formed in tacks,” said forensic anthropologist Francisco Etxeberria at a news conference on Monday.

Researchers will now examine the bones in the coffin, hoping to identify Cervantes’s remains by the war wounds he endured. It appears that the remains of several individuals reside in the casket. Cervantes was shot twice in the chest and once in his left hand during the Battle of Lepanto in 1571, injuries that would have recorded their impact for all time on the author’s bones.

Cervantes – who died in April, 1616 – was known to be buried in the convent, but the exact location of his grave was lost after the church was renovated in 1673. Researchers began their search nine months ago, using advanced technology to identify 33 alcoves in the convent’s crypts beneath the convent’s floor where the bones could be stored.

The discovery this weekend was a major breakthrough, but Etxeberria cautioned that while an interesting find, “from an anthropological point of view” they have not made any concrete advances yet on identifying the remains.