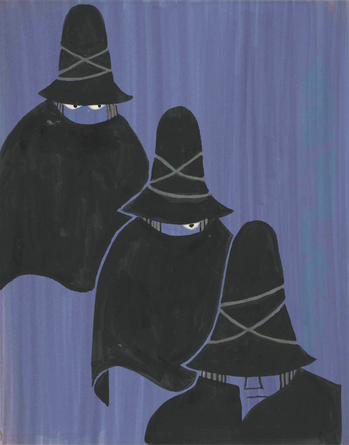 Tomi Ungerer is one of those multi-talented artists who, while known to many, is never quite known for the same thing. To some, he is a graphic artist whose commercial art for newspapers and magazines in the 1950s-60s was fresh and thought-provoking, while others appreciate the erotic drawings that raised quite a stir upon publication. For most, however, Ungerer’s fame is greatest as a children’s book author-illustrator. In The Three Robbers (1961), Moon Man (1966), The Beast of Monsieur Racine (1971), and many others, he was chipping away at a new kind of children’s literature, something more imaginative and less conventional, that influenced the likes of Maurice Sendak and Shel Silverstein. “No one, I dare say, no one was as original. Tomi influenced everybody,” said Sendak. 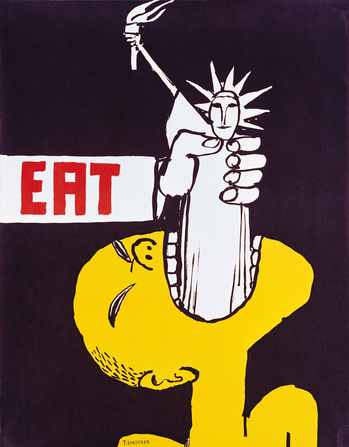 On view now at New York City’s Drawing Center is Tomi Ungerer: All in One, the first career retrospective in the United States dedicated to the artist. The exhibit shows the many faces of Ungerer–and in doing so, rounds out our constricted knowledge of him. Ungerer may be the 1998 winner of the prestigious Hans Christian Andersen Prize for children’s literature, and his most recent book, Fog Island (2013), may have been heralded as a top children’s book of the year, but he can still use the re-introduction that a major retrospective can furnish. Some priggish responses to his erotic illustrations had convinced him that his days as a children’s illustrator were over, and after the publication of his Fornicon in 1971, he and his wife abruptly relocated to Nova Scotia, in a sort of self-imposed exile. Ungerer continued to make art, and in 2007, the Tomi Ungerer Museum opened in the city of his birth, Strasbourg, France.

Tomi Ungerer: All in One is up through March 22. A limited edition, signed print of Ungerer’s Eat Poster and an extensively illustrated catalogue containing curatorial essays and an autobiographical statement about drawing by Ungerer are available in the gallery.