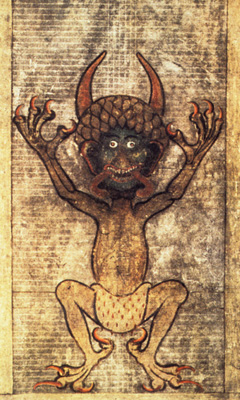 Sometimes the devil is in the details, but he’s not hiding from anyone at the National Library of Sweden. Visitors can catch a full view of Satan by examining the 13th-century Codex Gigas–“Giant Codex”–the largest extant medieval manuscript in the world, clocking in at over three feet long and weighing 165 pounds. (It takes two people to lift the thing.) Along with a complete Latin translation of the Bible, the Codex Gigas includes five shorter texts discussing exorcisms, magic potions, a list of saints, and a history of Bohemia.

Most astonishing, the same scribe wrote the entire manuscript – probably a monk at a Benedictine monastery in Bohemia (Czech Republic). Some researchers point to a mysterious monk named “Herman the Recluse” as the author, but since no other work by Herman exists, the theory is impossible to verify. Written on ruled guide-lines, the pages filled with two columns of 106 lines each, the script maintains a remarkable uniformity from start to finish. Researchers estimate that it would take one person five years of around the clock work to complete the Codex Gigas, meaning it’s more likely that this one scribe spent between ten to twenty-five years (or three hours a day) writing and illustrating the manuscript.

After the book’s completion, rumors circulated suggesting that such a task was too large for one person to actually complete without supernatural help, and that the devil assisted in its creation. A full-page portrait of the Prince of Darkness in all his fire-breathing, loin-cloth wearing, green-faced glory appears inside the manuscript, earning the Codex Gigas its nickname “The Devil’s Bible.”

The Codex Gigas passed through many hands before ending up in Sweden. The Benedictines pawned it off to another monastery to settle financial debts, and in 1594 it ended up in the possession of King Rudolf II of Hungary. It was plundered by the Swedes in 1649 during the Thirty Years War, who brought it to the National Library in Stockholm, where it has been ever since. The entire manuscript is now digitized and available for examination at the library’s website. Commentaries and historical analysis assist in understanding this massive and bedeviling book.