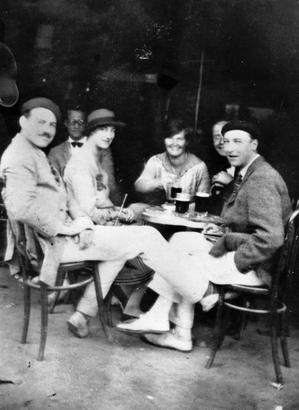 Ernest Hemingway with Lady Duff Twysden, Hadley, and friends, during the July 1925 trip to Spain that inspired The Sun Also Rises [credit: Wikipedia]

In an excellent conversation piece posted on BBC’s Culture page, journalist Jane Ciabattari argues that 1925 was the greatest year for books.

”The year 1925 was a golden moment in literary history.  Ernest Hemingway’s first book, In Our Time, Virginia Woolf’s Mrs Dalloway and F Scott Fitzgerald’s The Great Gatsby were all published that year. As were Gertrude Stein’s The Making of Americans, John Dos Passos’ Manhattan Transfer, Theodore Dreiser’s An American Tragedy and Sinclair Lewis’s Arrowsmith, among others.”

I thought we’d examine the books cited by Ciabatarri from a collectable lens.

1) “In Our Time” by Ernest Hemingway.  Published by Boni & Liveright in New York City in 1925 in an edition limited to a scant 1335 copies.  If you want to purchase one of those copies today, expect to dish out roughly $1k. And if you want the dust jacket – one of the rarest Hemingway jackets to find – you’ll need a bit over $20k.

2) “Mrs Dalloway” by Virginia Woolf. Published by The Hogarth Press in London in 1925 in an edition of 2000 copies. You’ll need about $1k to pick up the first edition of Mrs Dalloway as well. The first edition is extremely rare with a dust jacket. The only copy I could find online was priced at $75k.

3) “The Great Gatsby” by F. Scott Fitzgerald. One of the high spots of 20th century literature collecting and famously rare and expensive in the original dust jacket. Published by Scribner’s in New York in 1925, a first edition of The Great Gatsby with dust jacket is a six figure purchase. You’ll need at least $125,000 for this beauty.

4) “The Making of Americans” by Gertrude Stein. Published by Contact Editions and Three Mountains Press in Paris in 1925 in an edition of 500 copies. $1200 will get you a first edition.

6) “An American Tragedy” by Theodore Dreiser. Published by Boni & Liveright in New York (who also published “In Our Time”), this is the cheapest book on this list. A copy can be had for $25. A first edition with dust jacket will set you back about $200.

7) “Arrowsmith” by Sinclair Lewis. Published in New York by Harcourt Brace, you can buy a first edition of Arrowsmith for less than $10 without the dust jacket. If you want the dust jacket, however, which is quite rare, you’ll need about $750.

So the books cited by Ciabatarri hold up quite well on the collectable side of the equation as well.  A fine collection of first editions with dust jackets of 1925’s high spots will set you back about a quarter of a million dollars.

And that’s just for these seven books alone.

What do you think? Any other contenders for best literature year?

Browse Biblio’s selections for the most collectable books published between 1919-1929.