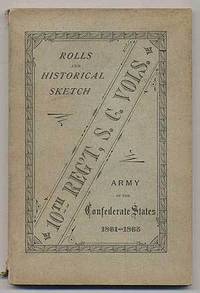 Rolls and Historical Sketch of the Tenth Regiment, So. Ca. Volunteers, in the Army of the Confederate States by Cornelius Irvine Walker

From the article on For.TheLoveOfBooks.com by Brendan Sherar entitled “Google Suppresses Books Mentioning the Confederacy“:

In response to the recent tragedy in Charleston and subsequent (and just) calls to remove the confederate flag from public buildings and monuments, Google last week announced it was jumping on the growing bandwagon of corporations that are pulling merchandise featuring the confederate flag from their shelves. For Google, this means automatically disapproving these “product listing ads” that are uploaded to its popular shopping portal by individual online retailers.

It isn’t just items that bear the flag, either. Any book with “confederate” in the title or description is being removed from the Google product feed.

While we support the removal of that particular symbol from an exalted place in public spaces, this heavy-handed response from Google (and other large companies) is a bit much. We don’t want to rewrite history, just change the future.

You can read the full article (and see lovely examples of “prohibited books”) here: