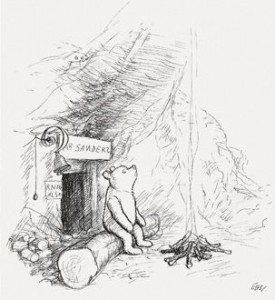 “Winnie-the-Pooh lived in a forest all by himself under the name of Sanders.”

Winnie the Pooh, the first in a series of children’s books about the eponymous toy bear and other cuddly inhabitants of the Hundred Acre Wood appeared between hardcovers on October 14, 1926, making 2015 the 89th year the world has reveled in the sweet tales penned by A.A. Milne and illustrated by Ernest H. Shepard. Since then, the four original books in the Pooh canon have been translated into fifty languages, including a Latin version, which spent 20 weeks on the New York Times bestseller list in 1960. Movies, merchandise, Disney adaptations, and subsequent stories continue to charm new generations of children worldwide.

While this isn’t exactly a milestone year for Pooh and pals, a few events are sure to draw the attention of fans and collectors alike. First up is the auction of a rare 1932 sketch of Winnie-the-Pooh and Piglet, available at Nate D. Sanders in Los Angeles. The watercolor includes a note from Shepard to his agent, Carter Brown, thanking him for all his good work. Minimum bidding starts at $50,000, and the auction runs until October 29. (Interested parties can follow the auction here.) Readers may recall the impressive December 2008 sale at Sotheby’s London, where a 42 lot sale of Shepard’s artwork that included 22 original Winnie the Pooh illustrations fetched £1.26 million ($1.97 million). 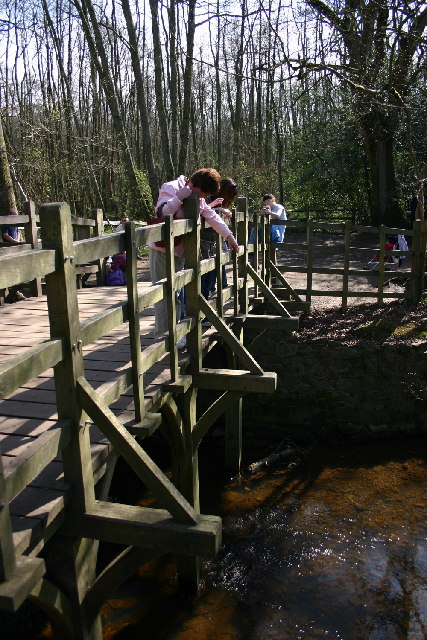 Nature enthusiasts will find much to enjoy in landscape designer and historian Kathryn Aalto’s The Natural World of Winnie-the-Pooh: A walk through the forest that inspired Hundred Acre Wood (Timber Press, $24.95, September 2015), where she discusses the Ashdown Forest, the real woodland setting where Milne’s son often wandered with his stuffed animals in tow. (Among other landmarks, the author points out the real Poohsticks bridge.) Parents nostalgic for a bygone era when children lost track of time playing outdoors might consider Aalto’s book a companion guide to the Pooh tales, a gentle reminder that so much of childhood is founded on magic and secret hideaway places.

I’ve been celebrating Pooh’s birthday by listening to The Best of Winnie-the-Pooh (A Gift Book and CD) (Dutton, $24.95, 1997), a selection of stories narrated by none other than journalist Charles Kuralt, whose distinctly sonorous, reassuring voice lends new dimension to the likes of Eeyore and Piglet.