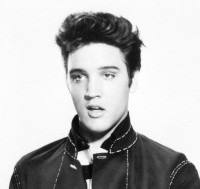 A 1957 cropped photograph of Elvis from a publicity still for Jailhouse Rock. Source: The Library of Congress.

In 1956, Elvis Presley hip-thrust his way onto American record charts and television sets, making his silver-screen debut in Love Me Tender and appearing on programs like The Ed Sullivan Show and The Steve Allen Show no less than 11 times. Perhaps the most thrilling place to catch a glimpse of the King that year was live in concert: Presley enthralled crowds in nearly 80 cities across the country, securing the sexy baritone’s place in the hearts of fans forever.

To celebrate Presley’s arrival on the entertainment scene 60 years ago, the Graceland Mansion hosted a series of events including an auction and birthday party that will extend through this weekend. (The singer would have been 81 today, January 8). The second-most visited home in America hosted a live auction with over 120 authenticated items, such as the 1969 custom Gibson Ebony Dove guitar that Presley played during his televised 1973 Aloha from Hawaii concert. Online bidding opened on December 16 for the flattop steel string acoustic instrument. Presale estimates valued it between $350,000-$500,000, however the guitar did not sell, failing to meet its reserve. (In comparison, an anonymous bidder paid $2.4 million in November 2015 for John Lennon’s Gibson J-160E acoustic guitar.) Fans with more modest budgets can order a reproduction Gibson Elvis Ebony Dove for roughly $3000. (Kenpo Karate decal not included.) 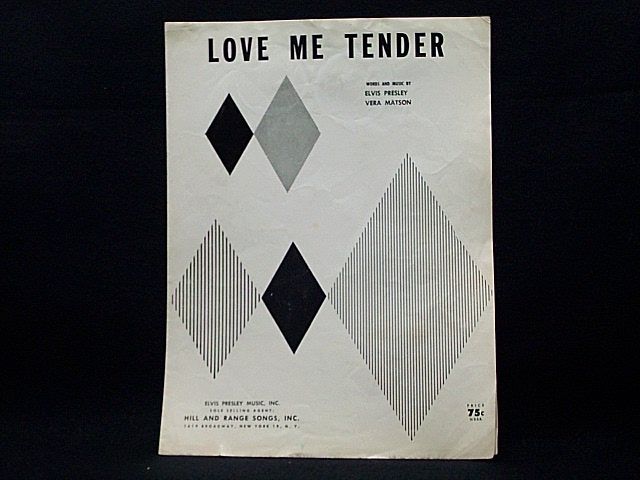 Sheet music for Love Me Tender. Listed on Biblio: https://www.biblio.com/book/love-me-tender-presley-elvis-matson/d/171745722

Ephemera fared better, including ticket stubs and a Humes High School library card upon which Elvis signed out a copy of The Courageous Heart: A Life of Andrew Jackson for Young Readers in 1948. That faded yellow card fetched $11,875. There was even a piece showcasing Elvis’ tender-hearted side: a telegram sent by Presley to Diane Pichler, a 13-year-old cancer patient about to undergo one of 16 operations that ultimately saved her life. Stamped October 28, 1956, 4:27 a.m., the Western Union telegram encourages the child to be strong, and that Elvis would be singing for her later that day on Ed Sullivan’s show. Pichler claimed in a newspaper interview two decades later that those words gave her the strength to persevere. This little letter sold for $1,000.