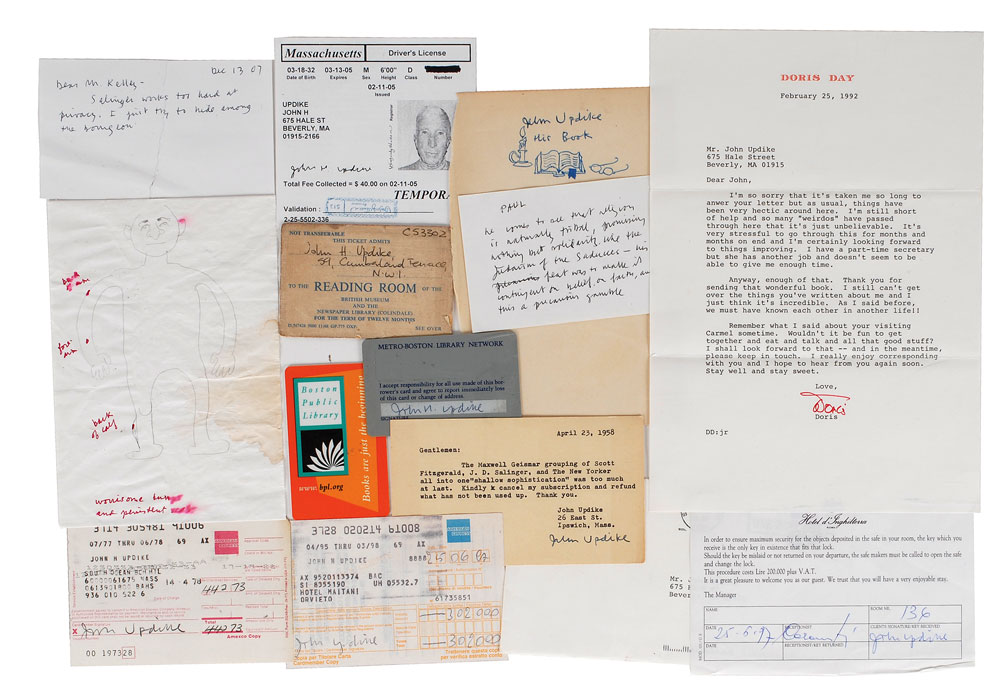 One man’s trash is another man’s treasure. We’ve all heard the saying, and in this case, it’s quite literal. Some may recall the news back in 2014 about Massachusetts resident Paul Moran, who, for several years before Updike’s death in 2009, would surreptitiously collect the writer’s garbage from his curb before the sanitation department got there.

What Updike had tossed was indeed interesting–signed documents, honorary diplomas, discarded drafts, canceled checks, bills, holiday cards. Moran referred to as “the other John Updike archive,” the more official archive, having been meticulously assembled and curated by the author over decades, is at Harvard University.

Now that collection of “trash” has found its way to RR Auction in Boston, where final bids will be accepted tomorrow, February 18, at 7:00 p.m. ET. The estimate is $20,000-30,000. The highlights, according to the auctioneer, include 3,500 personal checks signed by Updike (many to bookshops and literary organizations), Updike’s address book, his library cards, several books inscribed to him or with his ownership stamp inside, and floppy disks labeled “Poems,” “Book Reviews,” “Now It Can Be Told, The Black Room,” and “Bluebeard.” Updike’s biographer, Adam Begley, told the Atlantic back in 2014 that the act of collecting this material represented “an outrageous violation of privacy,” which is certainly an arguable point. He also called the collection “completely worthless,” which seems, to me, untrue. Not only will Updike collectors find value in owning something associated with the Pulitzer Prize winner–something as fantastic as a book inscribed by Salman Rushdie to Updike or as lowly as one of Updike’s many golf scorecards–I would venture to guess that scholars will too. The floppy disks, the “hundreds” of photos and slides, the trip itineraries, whatever salvaged manuscript or draft material–all seem worth keeping for some future biographer, even if the esteemed author thought otherwise.

Auction Update: “Several bids were made but none came close to the minimum price of $20,000 set by Moran, said Robert Livingston, executive vice president of the auction house.” Source: JacksonvilleProgress.com