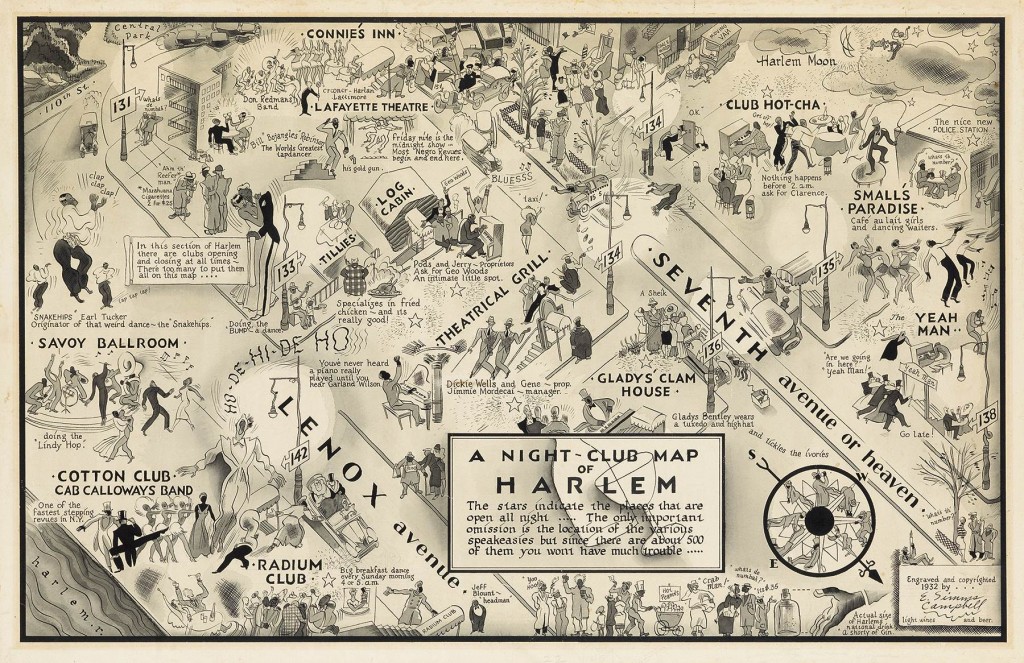 This 1932 Night-Club Map showing Harlem’s entertainment hotspots (the Savoy Ballroom, the Cotton Club) appeared as a centerfold illustration in volume 1, number 1 of the 1932 Manhattan Magazine, and again nine months later in Esquire. It was created by E. Simms Campbell (1906-1971), one of first commercially successful African-American cartoonists. He steadily produced artwork for Esquire upon its launch in 1933, and his work was also published in Cosmopolitan, The New Yorker, and Playboy. According to the New York Times, a museum curator rediscovered the map in 1993 when he was organizing an exhibition about Louis Armstrong for the Queens Museum. Since then, copies of the pictorial map have found their way to auction–selling most recently for $16,000 at Swann Galleries in 2011 and for $12,000 at PBA Galleries in 2014.

Now, the original artwork for A Night-Club Map of Harlem will go to auction at Swann Galleries on March 31, estimated at $40,000-60,000. Measuring 19 1/4” x 30,” the map is executed in pen and brush on Whatman Drawing Board and is signed in ink by Campbell.

Other sale highlights include a signed copy of Toni Morrison’s The Bluest Eye and the 1848 edition of Narrative of the Life of Frederick Douglass, published at the office of the North Star, Douglass’ paper.