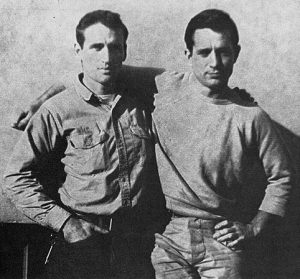 Kerouac and Cassady [Image from Wikipedia]

Neal Cassady’s hugely influential 1950 letter to Jack Kerouac – called “The Joan Anderson Letter – will be a leading lot in the June 16th auction at Christie’s.

The 13,000 word stream-of-consciousness letter was penned to Kerouac while Cassady was on a three day Benzedrine high.  Among other topics, the Cassady letter ruminates on his chaotic love affairs, particularly with a woman named Joan Anderson who he visited in a hospital after a failed suicide attempt. Cassady’s spontaneous prose was nothing less than a revelation to Kerouac, who, after reading it, trashed his early drafts of “On the Road” and started over with what would become his trademark style.

“It was the greatest piece of writing I ever saw, better’n anybody in America, or at least enough to make Melville, Twain, Dreiser, Wolfe, I dunno who, spin in their graves,” Kerouac said to a journalist with The Paris Review in 1968.

Long thought lost, the Joan Anderson letter resurfaced in 2012 in the files of the Golden Goose Press after following a circuitous route to arrive there in the first place. A planned auction of the letter was set at Profiles in History in 2014, (which we wrote about on this blog) but was later cancelled when both the Cassady and the Kerouac estate filed claims of ownership for the letter.

Almost two years later, the letter is with Christie’s. It remains unclear – at time of writing – which person, or what estate, is now offering the letter for auction.

Only a fragment of the letter has ever been published.

This auction will be one to watch.