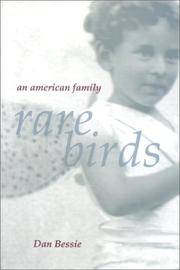 Yesterday’s Google Doodle of the day was about a famous bird watcher named Phoebe Snetsinger.

As people noticed and appreciated the Google Doodle, we noticed traffic to a particular listing of a book, Rare Birds: An American Family.

This book is not *just* about Phoebe Snetsinger, although her story is featured strongly. Penned by Dan Bessie, Phoebe’s cousin, the narrative tells of the whole family and their interesting tales.

From the publisher: “…the author details the numerous and often extraordinary achievements of his family. His uncle Leo Burnett headed one of the world’s largest advertising agencies, his father’s cousin helped found the Athenaeum Press, and another uncle, Harry Burnett, founded a Los Angeles theatre.”

Learn more about this particular signed copy of “Rare Birds: An American Family” listed on Biblio by Warwick Books.

Click here to view ALL copies of this book on Biblio, including reading copies and collectible copies alike.