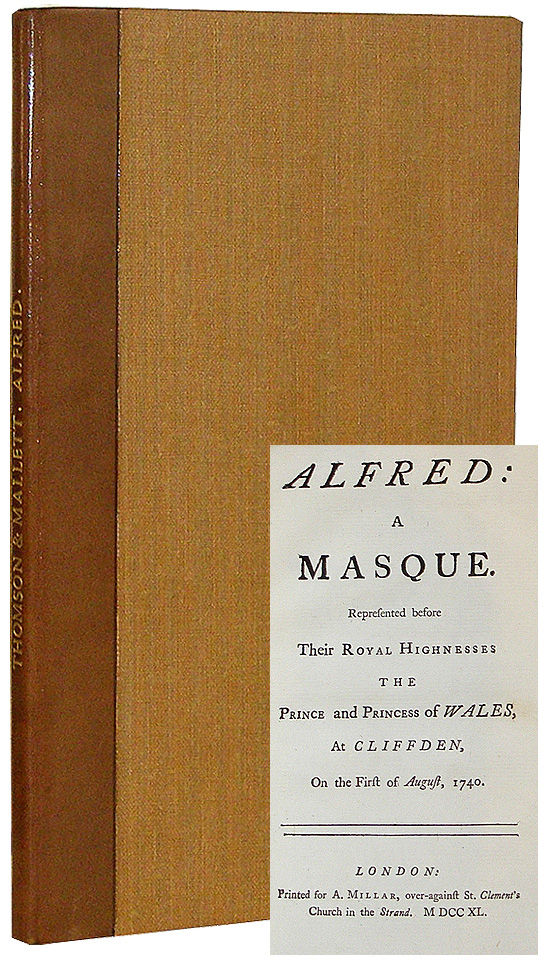 This lovely copy is listed by B & B Rare Books, Ltd., ABAA

In the wake of the British “Brexit” vote that not only begins the process of withdrawing from the European Union, but also potentially triggers the break-up of the United Kingdom, the libretto to a piece of eighteenth-century theatre illustrates the tangled history of Britain and Europe.

In 1700, England faced a succession crisis: twelve years previously, the Roman Catholic king James II had been ousted by his daughter, Mary Stuart and her husband, the Dutch Protestant William of Orange. They had no children, and Anne, Mary’s sister and the heir presumptive, had just lost her only surviving son. Every other Stuart in close direct line to the throne was a Catholic, and across Scotland, many “Jacobites” agitated for the restoration of a Catholic monarch.

To secure the throne for Protestants, the English parliament passed the Act of Settlement in 1701, guaranteeing the throne to the distantly-related Stuart princess Sophia of Hanover and her descendants. In 1707, under Queen Anne, the Act of Union merged the English and Scottish parliaments. Seven years later, on Anne’s death, the throne passed to Sophia’s son George, and the ruler of a small German state became the first King of Great Britain and Ireland.

During the reigns of George I and George II – foreign-born kings ruling from England over fractious Scots -– a new cultural and political identity emerged among a growing middle class. As the historian Linda Colley explains in her book Britons, “Britishness” was not dependent upon old geographic allegiances or blood ties, but encompassed the entire island (Wales had long been united with England; Ireland stood alone). It was defined by Protestantism, parliamentary supremacy, and civil liberty; it projected power through trading prowess backed up with naval strength. It also stood against its chief European rival: whatever “British” might be, it wasn’t French.

In 1740 two Scots, David Mallet and James Thomson, seeking favor from the royal court, created the masque Alfred to celebrate the Hanoverians as true successors to a medieval defender of the nation from Viking invaders. The masque itself is largely forgotten, but its final song, written by Thomson, quickly gained a life of its own as a patriotic anthem, and can be heard every September in London amid the boisterous flag-waving of the Last Night of the Proms: “Rule, Britannia! Britannia, rule the waves: Britons never will be slaves.”

For a rousing rendition of “Rule, Britannia” enjoy this performance by Sarah Connolly (and the audience!) during Last Night of the Proms ’09, inside the Royal Albert Hall.

Nick Sweeney is a writer and technologist with a special interest in the literature, culture and science of 18th-century Britain. His website is at NickSweeney.com