I, unlike many self-proclaimed nerdy kids my age, didn’t properly get to meet and make friends with Bilbo, Frodo, and the gang until I was in college. Sure, sure, I’d gone to midnight premiers for the Lord of the Rings movies with gaggles of friends, but I didn’t dress up like Gandalf and I sure as heck didn’t know a single phrase in the Elven tongue. I thought Silmarillion was the type of metal from which Bilbo’s chain-mail shirt was made.

That changed in college, though. I went to a small women’s liberal arts school, where the month-long winter term was usually a way to get some of our required credits out of the way in the most ridiculous manner possible. Loads of my friends were off traveling to Mexico, Tunisia, or London. I would have been bummed about not going abroad, but the week we were to sign up for our January Term courses, a friend told me about two classes that totally out-shadowed all those exotic adventures: a music history course centered on The Beatles and a political science course lovingly named The Politics of Middle-Earth.

The class consisted of myself, maybe thirteen other students, and our professor, Dr. P. — the type of energetic, rambling genius that spoke Klingon and was well-known for antics like barking in class to wake sleepy students.

The work-load was simple: we had to read a certain number of chapters each night, making our way through the three books of the LOTR trilogy and then the first half of The Silmarillion, and come in each day prepared to discuss it.

The first day of class, we all settle down and our esteemed professor comes in, the twinkle in his eye telling a completely different tale than the lethargic shuffle in his early-morning step. He puts his things down by his seat and asks, “So how many of you have already read these books before?”

Literally everyone but me raises their hand.

I felt like the smallest of hobbits in a room full of dwarves, staring at a madcap wizard.

Then he says, “So the thesis I submitted to make sure we could actually do this class said that our goal was to,” and here he affected a terribly posh accent, “through analysis of the text and class discussion, decide what sort of political system Tolkien himself favored.” Then he smiled. “But considering he wrote a book called Return of the King, I’m pretty sure we can all guess what he thought was best.”

And suddenly my professor was no longer some mundane man of learning, but a subtle-minded trickster who enjoyed sharing little jokes with our assembled company. And considering there was one of him, twelve nerds who’d already read the books, and then me, a complete amateur, it felt more like the beginning of The Hobbit than any political science course had any right to feel. I had no idea what exactly I was signing up for, everyone was really enthusiastic about burgling precious class-time to take this subject way less seriously than the powers-that-be would approve, and there were frequent bouts of chanting and singing the songs that never made it into the movies.

One of my favorite memories came from the end of The Two Towers, when an older classmate told us how she’d been one of the people eagerly awaiting the books as they hit the shelves, and how someone in her hometown had been so worked up about the end of the book they’d taken to the town water tower to paint in blazing letters, “FRODO LIVES!”

(I’d like to point out the lovely parallel at play here: this class happened in January of 2006. Just the previous summer, my generation lost its collective mind over Dumbledore’s fate at the end of Harry Potter and the Half-Blood Prince…)

By the end of the month, I found a whole new respect for what a game-changer Middle Earth was. It had never really struck me before how much it shaped the entire High Fantasy genre–and this is something you’d think I’d have considered! I was an English major! I found myself impressed and amazed at the depth of history and world-building that went into Tolkien’s little universe, how much subtlety he wove into the hobbits’ brand of “coming-of-age,” and the very wry, very dry humor with which Tolkien spun his tales. 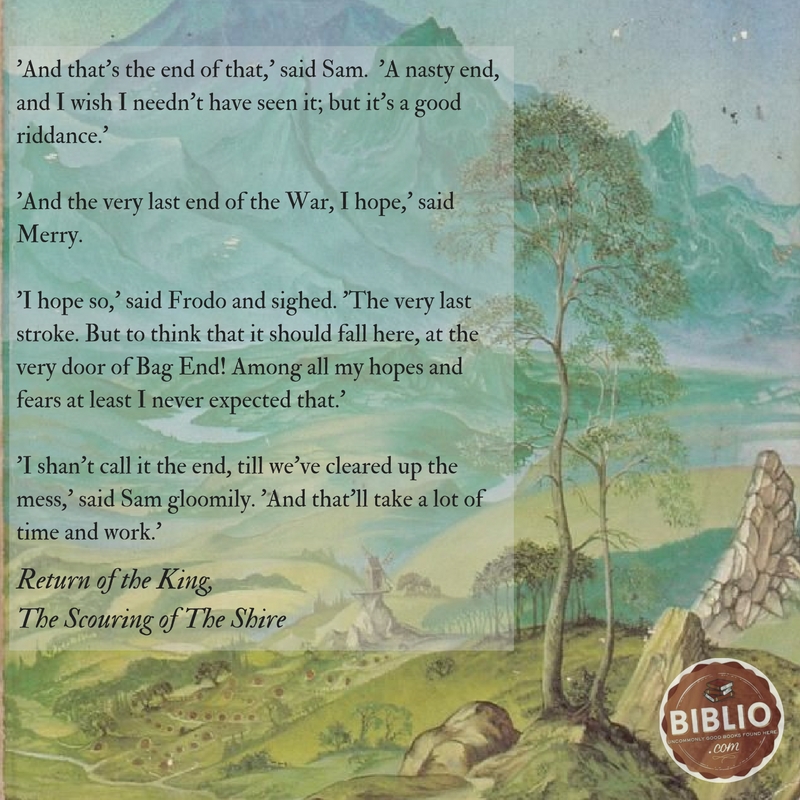 The most memorable part of that whole class was one day toward the end of the month, when we were discussing The Scouring of the Shire and the Battle of Bywater. I can still hear the way Dr. P.’s voice dropped when he spoke of it.

“They can’t ever return to the way things were before. The Shire had been protected for so long, but now it was part of the world, and evil was in it just the way it had always been everywhere else. Merry, Pippin, Sam, and Frodo were changed, but the whole Shire was, too. This was the end of an entire community’s innocence.”

Oooh, that one got me right in the chest. It still does, every time I hear the Shire theme from the movie scores. I don’t think of Elijah Wood’s face as his Frodo and Sean Astin’s Sam dream of home. I think of Dr. P. and that quiet little revelation.

I think that’s what’s stayed with me the most, both from Tolkien’s work itself as well as that one ridiculous month-long class. There have been a handful of times in the past ten years that I’ve had that moment, that, “There’s no turning back from this,” revelation.

Thankfully none of my own have involved walking the length of a continent to throw a piece of jewelry into a volcano, but that’s what sits with me all the same. In those moments, I feel a little bit like a small hobbit in a big world, and I realize I can accomplish much more than anyone assumes of me.

I’ve got Tolkien to thank for that, and I think a great many of his fans do, too.