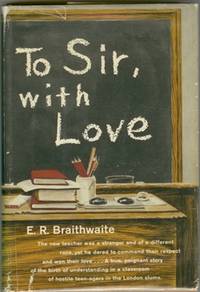 This copy is listed by Attic Books on Biblio.

Guyanese author E.R. Braithwaite has passed away at the venerable age of 104.

Braithwaite is best known for his award-winning novel To Sir, With Love. This autobiographical tale tells of his time as a schoolteacher in the East End of London. The book was made into a film starring Sidney Poitier and the singer Lulu.

His writings mostly dealt with the difficulties of being a black man with a classical education in a world full of discrimination.  Braithwaite joined the Royal Air Force during WWII and afterwards achieved a doctorate in physics at the University of Cambridge. Unable to find work in his chosen field, he became a schoolteacher, which inspired To Sir, with Love. After that, he turned to social work and helped find foster homes for children of color in London. That work inspired his next book, Paid Servant: A Report About Welfare Work in London.

Braithwaite applied to travel to South Africa in the early seventies, and they gave him a visa with the status of “honorary white.” The things that he heard, saw, and experienced over the next six weeks became the book Honorary White.

Toward the final years of his life, E.R. Braithwaite worked as a diplomat and as a professor.